Arkansas right on schedule thanks to the wonders of Ryan’s arm and Bobby’s brain, but an element of uncertainty remains 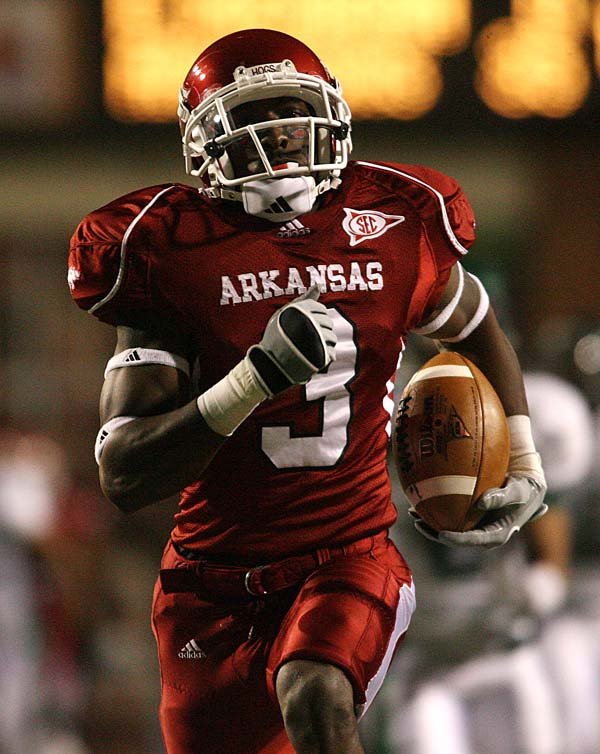 Arkansas' Joe Adams runs after the catch for a touchdown against Eastern Michigan Saturday, October 31, 2009 at Reynolds Razorback Stadium in Fayetteville.

FAYETTEVILLE — A sterling 2010 Christmas gift from Arkansas football to its fans would be a Bowl Championship Series game or other top tier bowl following a battle for the SEC championship.

How close is that to reality?

This year’s holiday gift was a return to the postseason party, to which Hogs fans responded with more than 25,000 tickets purchased to the Liberty Bowl. The Razorbacks were on the verge of something greater.

“We’re building it,” Coach Bobby Petrino said. “I thought our season was good. I think if we would have had a win against LSU or a win against Florida, the two games that we had the lead in the fourth quarter, then it’s a better season.”

Look at the strides the Razorbacks (7-5) made in Year 2 under Petrino. After absorbing lashings in 2008 by national powers Alabama and Texas, the Hogs were much more feisty this year.

“We’re on the edge of where we want to be,” said quarterback Ryan Mallett, whose play helped lift the Razorbacks into quasicontender status.

“We kind of went up that hill, like that choo-choo train did, and you know we’re kind of keeping on going,” tight end D.J. Williams said. “I think we’re going to be one heck of a team in the years to come.”

Arkansas’ worst losses - to Alabama and Ole Miss - were both on the road, and the Hogs were within reach in the second halves of both games, even though they were being outplayed.

The Razorbacks were within a few plays of a clear-cut third-best finish in the SEC behind Alabama and Florida had they survived down-to-the wire thrillers at No. 1 Florida and No. 17 LSU and avoided their penalty meltdown against Georgia.

“I think we’ve learned how to win, but there is still a ways for us to go,” offensive coordinator Garrick McGee said.

“We have to win those huge games in these big environments against these nationally ranked teams. ... Florida and Alabama and LSU, those are the people we’re going to have to beat to accomplish our goals, and our goal is to win a national championship.

Arkansas had the second youngest team in the SEC, based on figures compiled by the conference, and one of the youngest teams in the nation.

“I say we’re definitely on the way up,” said sophomore linebacker Jerico Nelson, who epitomizes the productive youth on the Razorbacks’ roster. “We had a great recruiting class from last year and the class I came in with, everybody’s still learning the process and the plays.”

“We should have a lot of guys returning, depending on how the draft turns out,” Franklin said. “I think we should be pretty decent next year, have a chance to win the SEC.”

Arkansas’ potential to contend in 2010 might depend on personnel. Quarterback Ryan Mallett and tight end D.J. Williams say they’ll ponder early entry into the NFL Draft. Picture the offense without those two standouts and the Razorbacks’ run to a title starts to tilt uphill.

Losing senior guard Mitch Petrus will hurt, as will the spark of tailback Michael Smith, despite his injury-plagued season. The playing time of senior receivers London Crawford, Lucas Miller and Reggie Fish must be filled.

The losses on defense won’t be big in numbers, but seniors Malcolm Sheppard, Adrian Davis, Wendel Davis and Matt Harris have a ton of starts between them.

Arkansas already boasts groups at receiver and running back that rank among the nation’s best, and four of five starters return on an offensive front that is building depth.

“I’m excited just because of the team we have, and it’s been so much fun to play with these guys all year,” Mallett said. “And next year is going to be a great team again. Just the cohesiveness of this group is unbelievable.”

If the Razorbacks get a little stronger in both trenches, toughen up a couple of notches on defense, and polish their offensive execution, they could be a contender.Plus the schedule gets a shade easier in 2010. Where the Hogs went on the road to four preseason top 15 teams in 2009, perennial SEC West contenders Alabama and LSU, plus Ole Miss, come to Fayetteville.

The Razorbacks have taken the approach that their preparation for the Liberty Bowl is laying the groundwork toward a run in 2010.

“We’d like to think the next couple of weeks are spent on next year, and this next game is the start of our 2010 season,” defensive coordinator Willy Robinson said. “We aren’t where we used to be, but we’re not where we want to be - but we are heading in the right direction.”

Former Arkansas assistant Paul Petrino shortly before he left for Illinois compared Louisville’s program built by Bobby Petrino from 2003-06 to the current Hogs.

“If we go out and do a great job at the Liberty Bowl and have a great off-season, then how you do next year, you move up,” Paul Petrino said. “Kind of like at Louisville, we won the Liberty Bowl then went to the Gator Bowl, then won the Orange Bowl. I think sometimes that’s how it progresses.”

However, Louisville’s ascent in the Big East did not have as many impediments as the obstacles facing Arkansas at the dawn of a new decade in the SEC. Alabama and Florida have each gone 12-0 the past two regular seasons and were ranked 1-2 heading into December.

On top of that, Auburn and Mississippi State appear to be on the rise, Ole Miss has established a new brand of physical play under Houston Nutt, and Alabama and LSU’s exemplary recruiting hasn’t slacked off.

The Razorbacks would like to make an emphatic statement to start off the new year in Memphis.

“It’s our job to go out and perform,” Williams said. “It’s to help recruiting. The thing I think is interesting about our players, it’s not just about us, it’s about building the program for years to come and that’s what we’re working on.”

Said Mallett, “We’re on the edge of where we want to be. We’re real close. It’s just a couple of pieces here and there, trying to put that puzzle together.”