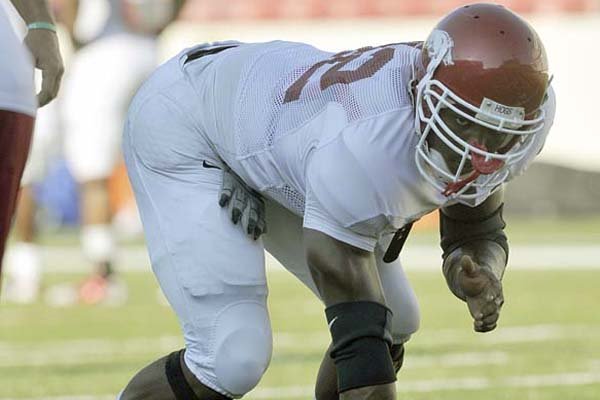 Chris Smith is among the Razorbacks freshmen who are adjusting to Division I football workouts as well as life away from home. Smith, a defensive end who is expected to contribute this season, said, “My mom makes some great pork chops. I’m missing that.”

The Razorbacks are in their second week of fall practice, but the team’s newcomers - many of whom have been on campus for the past couple of months -have been around long enough to have learned that college is quite a change from high school.

Adjusting to the college game can be tough enough. Getting used to competing against bigger, stronger and faster players isn’t easy. There is also a considerably thicker playbook to learn, and players have to get accustomed to the heightened pace Arkansas Coach Bobby Petrino demands during practices.

Then there is the other stuff, like dealing with being homesick and learning to do things for themselves.

All of it can be overwhelming, even for the most talented football player.

Defensive end Chris Smith is expected to contribute this season and was known for being a playmaker at West Rowan High School in Mount Ulla, N.C., but he’s already learned that ability alone doesn’t get it done in college.

“In high school, you just go out there and do it off of talent,” Smith said. “In college there’s a whole lot of mental stuff you have to prepare for, so basically in college you have to be more of a student of the game.”

Smith’s high school team used a 50-based defense and he primarily rushed the quarterback, but the Razorbacks coaching staff is asking him to do more.

“Here I’m dropping back and into coverage and things like that,” said Smith, who is getting help with the playbook from junior defensive end Jake Bequette and sophomore end Tenarius Wright. “The first couple of days it was hard to get used to that, but once you do it every day, it’s easy to me.”

But not even Bequette and Wright can solve everything.It’s really been tough not being able to eat his family’s home cooking.

“My mom makes some great pork chops. I’m missing that,” Smith said, laughing. “My dad cooks breakfast in the mornings, so I miss my dad’s breakfast.

“They feed us good here, though, so I’m not complaining.”

Receiver Maudrecus Humphrey of Hoover, Ala., is dealing with his share of adjustments as well.

“You have to be independent. You have to be responsible,” he said. ”That’s the whole part of going to college and being on your own.”

Humphrey has already learned some valuable lessons when it comes to doing laundry without the help of his mom.

“I think I mixed up some clothes,” Humphrey said. “Ihave some red spots on my shirts. I messed up and threw a white shirt in there.”

Maybe Humphrey should have consulted with Byran Jones, a 6-3, 310-pound defensive tackle out of Junction City, who has been doing his laundry since the eighth grade. Jones might still be learning how to help out on the defensive line, but apparently his laundry skills are way ahead of the curve.

Doing their laundry isn’t the only thing that has tripped up some of the freshmen.

Tight end Garrett Uekman of Little Rock said the complexity of Arkansas’ offense has been difficult.

“In high school, we didn’t really have a playbook,” said Uekman, who played at Little Rock Catholic. ”When I got here, we had a huge playbook. I had a lot of learning to do.

“It’s still kind of hard, but once we get on the field it’s a whole lot easier. It’s coming along.”

Safety Daunte Carr of Gainesville, Ga., uses his downtime before going to bed to soak up the playbook.

“You have to take your time and go through the playbook at night before you go to bed,” Carr said. “Take 20 to 30 minutes just going over the playbook, stuff you’ve already learned, and go through a preview of what you want to learn tomorrow.”

Then, there is Jason Veltkamp’s strength and conditioning program, which has challenged Marquel Wade, a receiver from Andrew Jackson High School in Jacksonville, Fla.

“The weight room and the conditioning part are really harder than high school,” Wade said.

Still, that hasn’t been the biggest adjustment for Wade.

“The thing I miss about home is my momma,” he said. “That’s the only thing. I wish she was here with me.”