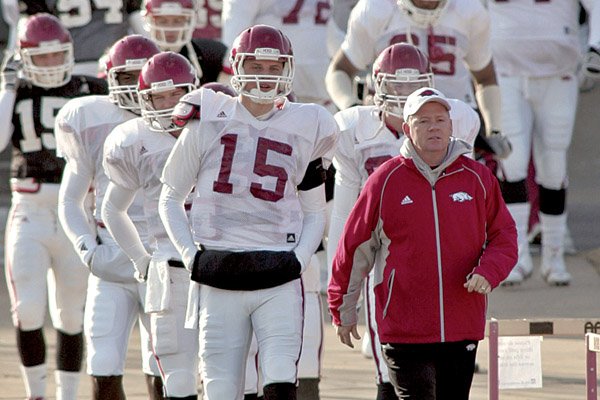 FAYETTEVILLE — Jim and Debbie are like nearly every other Arkansas Razorbacks football fan.

They’d like to see sophomore quarterback Ryan Mallett return for his junior season with what shapes up as a loaded Arkansas team.

But Jim and Debbie’s opinion about Mallett should carry significantly more weight than the average Arkansas fans. They’re his parents.

“Why wouldn’t he want to come back next year with all they’ve got coming back?” Debbie asked. “That’s what I don’t get.”

Said Jim: “I’m telling you, you could walk out on this field next year, Ryan could, and with the receiver corps we have, it will look like an NFL receiver corps on that field. And the offensive line coach, he’s real excited about what he’s got coming back.

...And the defense will be better.”

Jim and Debbie Mallett were sitting at sold-out Liberty Bowl Stadium before the Razorbacks’ 20-17 victory over East Carolina on Saturday, and the Malletts said their son has not revealed whether he’ll come back to Arkansas or declare early for the NFL Draft.

“We’re at a loss,” Debbie said. “We have no clue. We hope he makes the right decision, but ultimately it’s his decision.” Underclassmen have until Jan. 15 to apply for the NFL Draft. Ryan Mallett left for an undisclosed location for a few days after the game Saturday night, and his parents hope he returns to Texarkana on Wednesday or Thursday. He’s due with the rest of the Razorbacks to attend a team meeting Sunday night in Fayetteville on the eve of the start of the spring semester.

The Malletts said Ryan has registered for classes to keep his bases covered.

The 6-7 sophomore, who lit a fire under the Arkansas offense with school records of 3,624 passing yards and 30 touchdowns in his first season as a starter after transferring from Michigan, has a lot on his mind.

He will have to consider where he might be picked if he declares, and whether he could be the first quarterback chosen. He’ll have to think through what another year under Petrino and quarterbacks coach Garrick McGee could mean for his future. Mallett, a lifelong Razorbacks fan, also will have to ponder what an offseason as a Heisman and Davey O’Brien candidate would mean in his life.

McGee, who coached with Petrino on the Jacksonville Jaguars staff, plans to share his thoughts with Mallett soon.

“Obviously it’s his decision, because it’s going tobe his life in the end that’s impacted, but I will have a conversation about what my opinion is and what I think is best for him,” McGee said. “I think he’s one of the top college quarterbacks in the country. There’s no doubt about it. But I do have an experience of being in the NFL for a couple of years with Coach Petrino and the quarterbacks.

Jim Mallett said in the conversations he’s had with NFL personnel that they would like to see another year of maturity in college.

Ryan Mallett is well aware there is room for improvement. He even spoke at the Liberty Bowl about what he could have done better this season.

“What were we, 55 percent in completions?” he said. “We should have been 65-70 [percent] easily and we weren’t. That disappoints me because we had a chance to and we should have.

Mallett did not indicate his plans after going 15 of 36 for 202 yards and 1 touchdown in the Liberty Bowl, for which he received MVP honors. But he did respond when a reporter asked what he needed to work on this spring.

“There’s always stuff to work on,” he said. “We need to become more knowledgeable of the game - the whole unit. I don’t think that’ll be a problem with the film study we’ll do. ... I think we’ve got the deep plays down pretty good. We just need to work on everything else and we’ll be fine.”

Asked if he would be part of that “we” this spring, Mallett said: “I promise I’ll let you know when I decide to do something.”

His parents don’t hesitate to say how they’d advise Ryan.

“Of course to stay,” Debbie said. “It’s a no-brainer. But I’m not in his shoes. I’ve never worked so hard for something, to have something right there at my fingertips.”

Said Jim: “I mean, it’s right there for him to touch.

“Every little kid in the world would want to play in the NFL. That’s their dream. And here he is, 21 years old. The money has nothing to do with it. That’s the least of his worries in his mind, or ours.

“You know, we’re just worried about our son. We want him to come back, to grow up more, for the maturity. He needs that a little more, more game experience.”