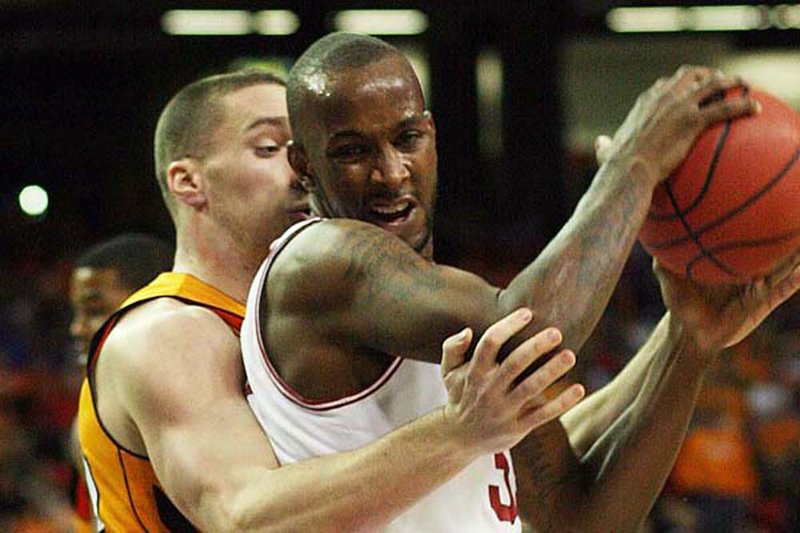 Arkansas’ Marshawn Powell, burdened by fouls and a death in the family, suffered through Thursday’s loss, playing only 19 minutes while scoring 4 points and getting 1 rebound.

ATLANTA — Forward Marshawn Powell said he plans to return to Arkansas for his junior season, and also offered an endorsement of John Pelphrey’s return as the team’s coach after Tennessee beat the Razorbacks 74-68 on Thursday night in the SEC Tournament at the Georgia Dome.

Arkansas (18-13) suffered a third consecutive SEC Tournament first-round loss and fell to 69-59 overall in Pelphrey’s fourth season as coach, increasing speculation about whether he’ll be retained.

“Look at who we’ ve brought in,” Powell said, referring to the highly-rated recruiting class Pelphrey signed in November. “It’s going to be tough for us to make a coaching change.

“If they keep him, and with the recruits we’ve got coming in next year, we’re going to be pretty tough to deal with in the SEC. So why not?

“The future looks good. Hopefully, it will be good.”

Powell’s words may surprise those who remember him declining to comment when asked if he had a strained relationship with Pelphrey. That was on Feb. 21, two days before Powell had a season-high 22 points and 10 rebounds to help the Razorbacks beat Kentucky for the first time in 10 years, 77-76.

Powell hadn’t talked with reporters since then, because he wasn’t available before or after four consecutive games. But reporters talked to Powell for a few minutes Thursday night because SEC rules stipulate team locker rooms must be open for postgame interviews.

Powell was asked if the media had overreacted to his “no comment” regarding Pelphrey.

“Yeah, y’all really did,” Powell said with a smile. “I just said ‘no comment,’ because that’s me and my coach, and our relationship should stay personal.”

Earlier in the season Powell posted on his Twitter account that it might be time for him to “relocate.” Did that mean he wanted to transfer?

“You’re still on that?” Powell said, again smiling. “It was just how I was feeling at the moment. That doesn’t mean I’m leaving or anything like that.”

Questions about Powell’s happiness at Arkansas and his relationship with his coach have been part of an overall disappointing sophomore season after he averaged 14.9 points and 6.7 rebounds in 31.0 minutes as a freshman.

Those numbers made Powell one of eight players picked for preseason first-team All-SEC honors by the conference coaches. But he is now averaging 10.8 points and 4.5 rebounds in 22.4 minutes per game and wasn’t among 17 players to make the coaches’ postseason All-SEC first and second teams announced on Tuesday.

“I was talking to my cousin and I said, ‘This is the worst year I’ve ever had in my life,’ ” Powell said. “I break my foot, get in a car accident.

“I’m not playing well at times when my team needs me. Just a lot of different things.”

Another downer for Powell came earlier this week when his grandmother, Maxine Smith, died after suffering a stroke.

Powell said he and his grandmother were “real, real close,” but he didn’t want to make excuses for his game against Tennessee that included 4 points, 4 turnovers, 4 fouls, 2 assists and 1 rebound in 19 minutes.

“It just wasn’t a good night for me,” Powell said.

Powell’s broken left foot happened in August while playing a pickup game in his hometown of Newport News., Va., and he had a car accident while driving on icy roads during Christmas break.

Powell also was suspended by Pelphrey for the North Carolina A&T game for an undisclosed reason after playing one minute in the previous game against Texas Southern.

“It’s been hectic,” Powell said. “A lot of things to deal with.”

Powell’s broken foot set him back in the preseason, and he never seemed to fully catch up.

“I already had worked hard to get to where I was before I broke it,” Powell said. “And it was even harder to try to get back.”

Powell said he probably tried to come back too quickly after breaking his foot, but that it feels fine now. He said he’ll look forward to playing in the NIT if Arkansas gets a bid.