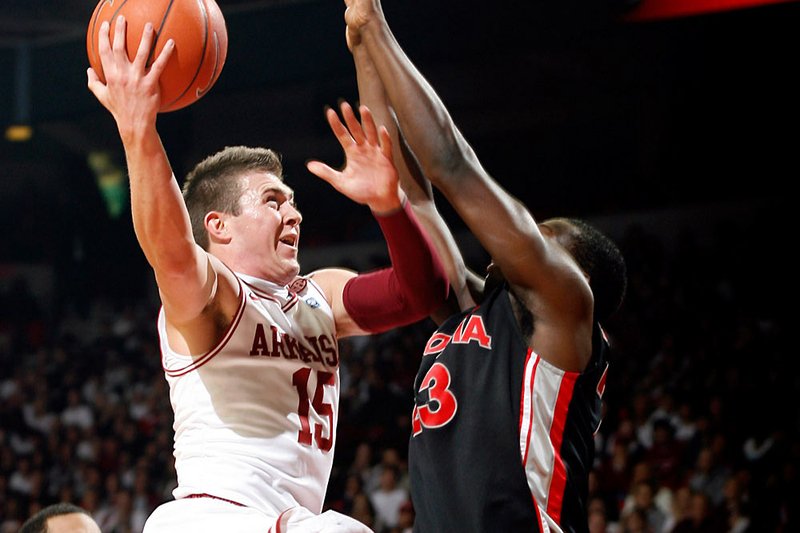 Junior guard Rotnei Clarke, who is second in school history in three-pointers made, reportedly was frustrated by a lack of structure and discipline at Arkansas.

FAYETTEVILLE — Arkansas All-SEC guard Rotnei Clarke may be looking for a new school to finish his college career, according to a report in the Tulsa World.

Clarke, who has scored 1,306 points in three seasons at Arkansas to rank 21st on the Razorbacks’ all-time list, requested a release from his scholarship for the purpose of seeking a transfer, the World reported, after John Pelphrey was fired as Arkansas’ coach March 13.

Arkansas Athletic Director Jeff Long denied Clarke’s request, the World reported, citing an unnamed source, and Clarke was told he couldn’t be granted a release until after a new coach is hired.

A source told the Arkansas Democrat-Gazette that Long asked Clarke to wait to see who the new Razorbacks coach would be before deciding whether he wanted a release.

Mike Anderson, a former Razorbacks assistant who has been Missouri’s coach the past five seasons, has accepted an offer to be Arkansas’ coach and an official announcement was given Wednesday night.

Clarke, the all-time scoring leader in the history of Oklahoma high school basketball with 3,758 points at Verdigris High School, couldn’t be reached for comment regarding the World’s report.

After Clarke’s sophomore season, a rumor surfaced that he was considering whether to transfer. It reached a point where Arkansas released a statement in which Clarke was quoted as saying he wanted to make it clear he would return to the team and that transferring never was his intention.

Prior to this season, Clarke reiterated he planned to finish his college career at Arkansas.

“It’s just kind of crazy how quick things can come out, but I wasn’t ever wanting to transfer,” Clarke said in November. “I love it here.”

Clarke averaged a team high 15.2 points per game this season as a junior and twice was named the SEC’s player of the week. He scored his SEC-high 36 points in the Razorbacks’ 89-78 victory at Vanderbilt.

Clarke was voted to the All-SEC second team by the coaches and was honorable mention All-SEC in a media vote. His 274 three-pointers rank second on Arkansas’ career list behind Pat Bradley’s 366.

Kelly Clarke, Rotnei’s uncle and former coach at Verdigris High School, told the World that his nephew has been frustrated by the Razorbacks’ “lack of discipline and lack of structure.”