Off to a good start

Hogs QB on target vs. Bears 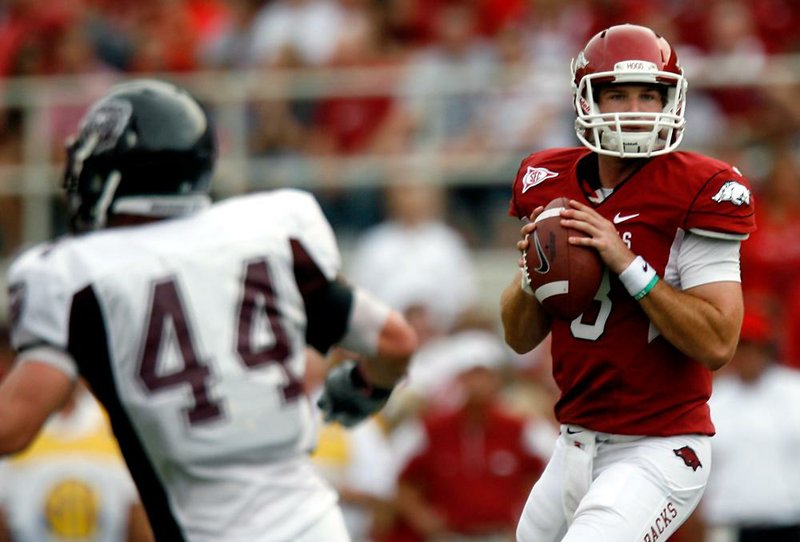 FAYETTEVILLE — Arkansas quarterback Tyler Wilson was plenty focused for Saturday night’s season opener against Missouri State, but he couldn’t help smiling in pregame warmups when his name was announced as a starter over the Reynolds Razorback Stadium public address system.

“The crowd cheered for him, and I saw him start smiling,” offensive coordinator and quarterbacks coach Garrick McGee said. “So to him, it had finally happened. He was the starting quarterback for the Razorbacks.”

Wilson, a redshirt junior from Greenwood, had played in 13 games for Arkansas off the bench, but Saturday night marked his first start since he was a high school senior in 2007.

Coach Bobby Petrino had announced several days earlier Wilson would start, and it had been apparent going back to last spring that Wilson likely would be the one to replace Ryan Mallett.

But knowing it was one thing for Wilson. Hearing it loudly proclaimed to a crowd of more than 70,000 made starting more special.

“It was an awesome feeling,” Wilson said. “It kind of gave me chills a little bit there in pregame and it was fun when they announced my name.

“Coach McGee looked at me and I looked back, and we smiled at each other. It was a moment I just kind of took in — ‘That was cool’ — and then went back to work.”

Wilson and McGee were smiling after the game, too.

The No. 15 Razorbacks rolled to a 51-7 victory and Wilson completed 18 of 24 passes for 260 yards and 2 touchdowns, both scores going to Jarius Wright. Wilson’s 75 percent completion rate was the ninth-best in Arkansas history with a minimum of 20 attempts.

“It was a great first start, and it’s nice having a good team around you,” Wilson said.

“I thought he was very poised, very under control and really understood what we wanted to get done,” Petrino said. “He threw the ball well and distributed it well.”

Wilson missed some passes he should have completed, he and the coaches agreed after the game, and he was sacked twice. But Wilson said those plays will be good learning experiences for the next week’s game against New Mexico and the season beyond.

“I don’t think you could have scripted it any better as far as your first start,” Wilson said. “That’s what you want. You got some pressure, you got hit a few times, you got some sacks.

“Everything that you’re probably going to see during the course of a game happened, and we also had a lot of success, so it was a good first start.”

Late in the first quarter, Wilson scrambled for a 7-yard gain to the Missouri State 1, where he was hit hard and upended by linebacker Ryan Callender and safety Caleb Schaffitzel. Tailback Kody Walker scored on a 1-yard run the next play to stretch Arkansas’ lead to 20-0.

Petrino praised Wilson for showing toughness on his near-touchdown run, but also said that in the future he needs to get on the ground and protect himself from injury.

“He didn’t tell me that. I’ll probably hear that in film [review].” Wilson said. “But I just wanted to send a message and display what kind of football I play.”

Wilson said he didn’t feel nervous before the game because he knew what to expect.

“I was ready to go,” he said. “I had a great training camp, the coaches prepared us really well. They’re hard on us, and so it was easy to go out there and play.”