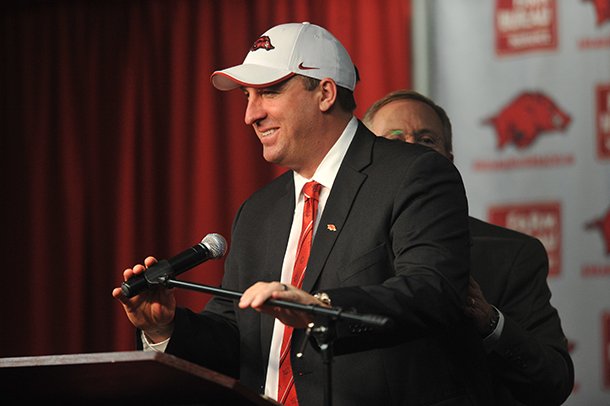 Speaking Friday on the "Dan Patrick Show", Bielema said his salary pool for assistants will nearly double at Arkansas as opposed to Wisconsin.

"It's nearly two-and-a-half times in some areas," Bielema said. "I've lost a lot of coaches the last couple of years. It was an opportunity for me to have some resources to hire assistant coaches and keep them to build something that has never been done here."

At Wisconsin, Bielema had to replace six assistant coaches following the Badgers' second consecutive Big Ten championship a year ago, with only one leaving for a head coaching position. Wisconsin's 2012 salary pool for assistants was $1.973 million - seventh among Big Ten public universities.

"Our pay scale for assistant coaches is more than competitive and fair," Wisconsin athletics director Barry Alvarez said Thursday. "As athletics director, I know what people are making, and every time someone has a hint that they may take another job, it's not prudent to jump and throw a pile of money at them."

Arkansas' staff made $2.603 million in 2012, an increase of 13 percent from the year before, when it had also received a cumulative pay raise of nearly $300,000. According to Bielema's comments Friday, that number would almost certainly have to jump again next year.

Where would the money come from? Arkansas has substantially increased its football revenue in recent years thanks to several areas, including a share of Southeastern Conference television revenue, playing games at Cowboys Stadium and a multimedia rights partnership with IMG College Sports.

In addition, memberships and donations to The Razorback Foundation, Inc., the fundraising arm for university athletics programs, increased as part of a seating equity plan for football the last two years.

According to a recent report released by the U.S. Department of Education's Office of Postsecondary Education, the overall athletics revenue at the university has increased from $64.2 million in 2008 to $99.8 million this year. 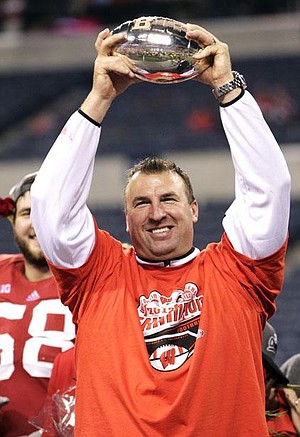 The same report states Razorbacks football is now responsible for 64 percent, or around $63.9 million, of the overall revenue.

By comparison, Wisconsin brought in 48 percent, or around $48.7 million, of its $101.5 million overall athletics revenue from football during the same time.

Bielema signed a six-year agreement on Wednesday that would pay him $3.2 million annually to coach the Razorbacks. He left four years on a Wisconsin contract that paid $2.6 million before incentives.

He could make up to $3.9 million at Arkansas after incentives. His predecessor, Bobby Petrino, made $3.56 million before incentives as part of a seven-year contract signed in 2010.

"This is not a situation where I'm trying to parlay it for another opportunity," Bielema said. "Coming to Arkansas, I met with our kids yesterday and had an unbelievable reception with our team, our administration and fans. hope to stay satisfied and stay hungry with and have a chance for us to win for a long, long time.

"As a man, I'm a guy that loves challenges and I wanted an opportunity to win in another conference. I was a defensive coordinator when (Kansas State) won a Big 12 championship and beat number one Oklahoma. As a head coach, I won Big Ten championships at Wisconsin. I want to go to the SEC and win championships."