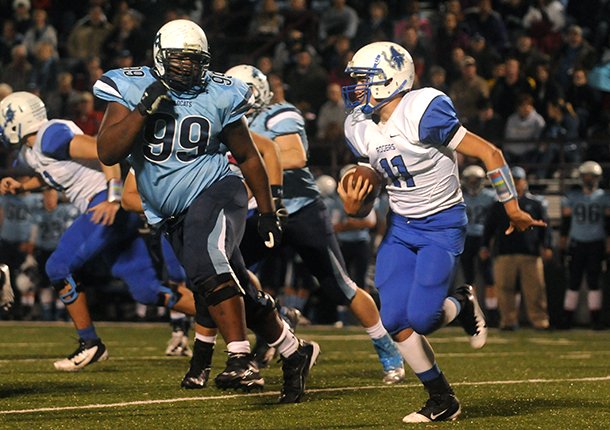 Springdale Har-Ber defensive tackle Josh Frazier (99) is one of the top in-state targets for the 2014 class.

Frazier, 6-4, 324, 5.1 seconds in the 40 yard dash, was offered a scholarship by Arkansas pervious staff but was reassured the offer was still on the table after talking to Bielema. Him visiting the Arkansas campus in the near future was also brought up.

"I'm hoping sometime in January," said Frazier, who also has offers from Alabama, Auburn and Arkansas State. "He just told me he wanted me up there when the dead period was over so I could meet him and some of the coaching staff and the new D-line coach."

Bielema spoke about what he and Frazier had in common.

"He talked about how he played defensive tackle ," said Frazier, who reports UCLA, Florida, LSU, Tennessee, Georgia and others possibly offering him. "So it was cool to hear because he's been there and done that. He said if I come to Arkansas he would make me a really good defensive tackle."

While at Wisconsin, Bielema had the Badger defenses among the best in the nation. His success in Madison is very attractive to Frazier.

"He had those really good years at Wisconsin," Frazier said. "He was known for being a really good defensive coach so I think he would help me develop. I'm just keeping my options open I don't want to commit too early or too late but kind of in between. We'll see."

Frazier said he wants to see how Bielema and the Hogs do next season before making any decision.