Wilson will remain at Arkansas 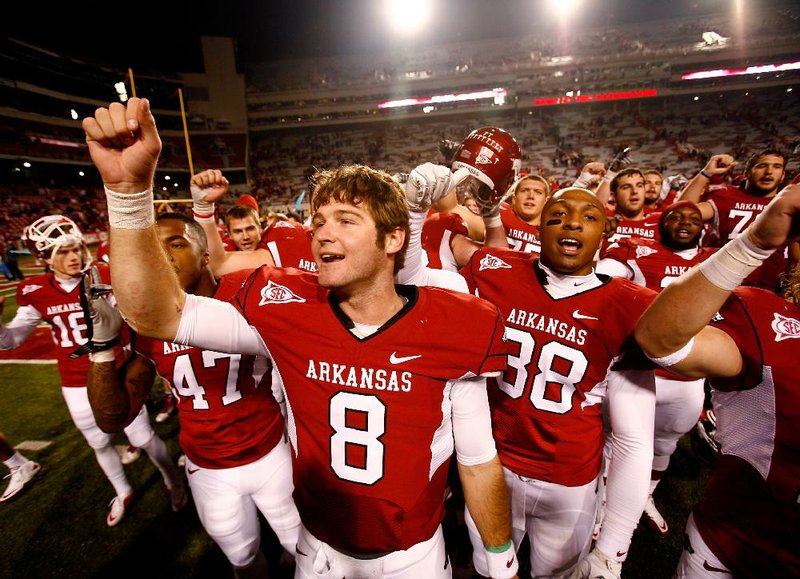 “Who doesn’t want to play on a top-10 stage with something to prove?” Arkansas quarterback Tyler Wilson asked. Wilson is seen here with his teammates singing the fight song.

FAYETTEVILLE — Quarterback Tyler Wilson will return to Arkansas for a fifth year, opting to skip the NFL Draft.

Wilson, who started all 13 games for the Razorbacks in 2011, had been rated as the third-best draft-eligible quarterback by ESPN.com last week. He joins running back Knile Davis and receiver Cobi Hamilton as underclassmen who have decided to play for Arkansas next season.

All had filed paperwork with the NFL Draft Advisory Board last month. Underclassmen have until Sunday to declare for this spring's draft.

“I have decided to stay at Arkansas for the 2012 season because I am extremely excited for what this team has the opportunity to accomplish and to finish earning my degree," Wilson said in a release announcing the decision. "After the feedback I received, the decision was difficult to make. Ultimately, the chance to complete my academics and play one more season as a Razorback were compelling reasons for me to remain in Fayetteville."

Wilson passed for 3,638 yards and 24 touchdowns in his first season as a starter at Arkansas, helping the Razorbacks to a 11-2 record and top 5 finish in the national polls.

He set new single-season school records for completion percentage (63.2), completions (277), and pass attempts (438). His passing yards are the second-most in a single season at Arkansas.

Wilson also set the school's single-game record with 510 passing yards in a comeback win over Texas A&M at Cowboys Stadium in October.

He was named first-team all-SEC quarterback by both the Associated Press and league coaches, and earned the offensive most valuable player award in the Razorbacks' Cotton Bowl win over Kansas State last week.

"The group of players we have returning has high expectations and wants to work hard to compete for championships," Wilson said. "Although my goal is to play in the NFL, I believe I can benefit greatly from another year of working with Coach (Bobby) Petrino and Coach Paul Petrino."

Wilson redshirted the 2008 season and was a back-up the next two years with the Razorbacks.

Thank you for coming to the website of the Arkansas Democrat-Gazette. We're working to keep you informed with the latest breaking news.