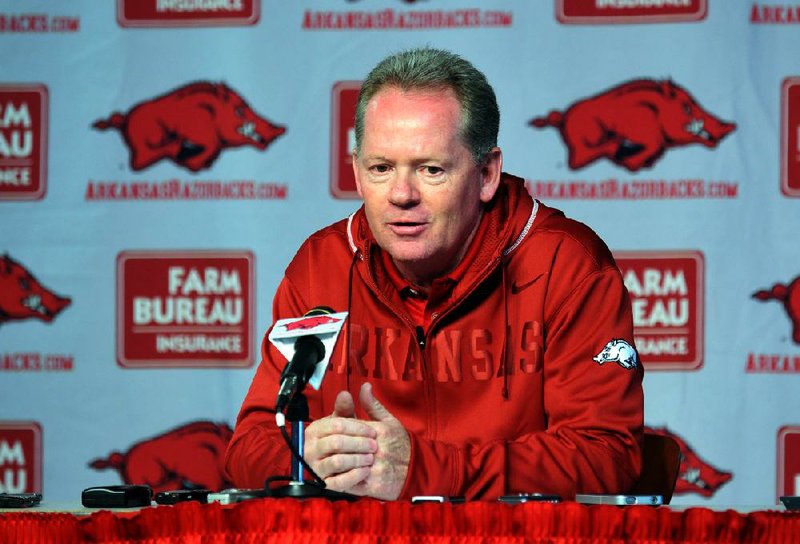 Arkansas Coach Bobby Petrino told reporters Tuesday he has not determined how much live work running back Knile Davis will have during spring practice.

FAYETTEVILLE — Arkansas has established itself as a major player in college football after playing in the Sugar Bowl and Cotton Bowl the past two years.

Now the Razorbacks have to remain there.

Staying near the top of the college heap, or perhaps even pushing their way into the program’s first BCS championship game, appears within reach for the Razorbacks in their fifth year under Coach Bobby Petrino.

Arkansas returns key regulars on both sides of the ball and in special teams heading into spring practice, which opens at 3:50 p.m. today at Reynolds Razorback Stadium. A number of the practices, including today and Thursday at 3:50 p.m., are open to the public after inseason workouts were closed throughout 2011.

Here is a quick look at the five key questions facing the Razorbacks going into the start of spring practice:.

Who’s going to be catching passes?

Cobi Hamilton and tight end Chris Gragg are the most experienced receivers, so it’s logical they would emerge as the top targets for quarterback Tyler Wilson.

Julian Horton led the younger crew in receptions with nine catches for 85 yards out of the slot last season, and he’s listed as the starter at Joe Adams’ old spot. Javontee Herndon (8 catches, 137 yards) gets first crack at the starting lineup as the wideout opposite Hamilton (34-542, 4 TDs).

How will the linebacker positions sort out?

Alonzo Highsmith had the most productive first season of any junior college transfer during Petrino’s Arkansas tenure with 80 tackles and a team-best 12 1/2 tackles for loss, and he’s back as a senior inside linebacker.

Arkansas’ base scheme will feature two inside linebackers, with Braylon Mitchell moving into the top role beside Highsmith and Matt Marshall getting the first nod at the strongside or “Sam” spot. Ross Rasner is listed as a safety, though he’ll still play the nickel back in that package.

Mitchell and Marshall will be the ones under big scrutiny, with guys like Jarrett Lake and Daunte Carr behind Marshall and Tyler Gilbert and Austin Jones behind Mitchell.

“When you look at their size, look at their speed, look at their movement through the mat drills and also their testing, those are the body types you like at those positions,” defensive coordinator Paul Haynes said of Marshall and Mitchell. “They’ve earned it.”

Robert Atiga, Terrell Williams, who has considerable experience, and freshman Brock Haman are listed behind Highsmith.

Can the defensive front stack up in the rugged SEC?

The Razorbacks may be as deep at defensive tackle and end as the program has ever been.

The first four at tackle — Byran Jones, Robert Thomas, D.D. Jones and Alfred Davis — have tons of starts and big plays in their background, while Lavunce Askew returns from a one-year hiatus to regain his eligibility. Freshmen DeMarcus Hodge and Horace Arkadie have big upsides.

Chris Smith slides into a starting role opposite Tenarius Wright, and he’ll have to show greater stamina in that spot. Highly touted junior college signee Austin Flynn and sophomore Trey Flowers are the top backups, along with senior Colton Miles-Nash.

Smith, Wright and Flynn all tested with big numbers this winter.

“I ask the defensive staff just about every day now for the last month, ‘What are you going to do if your three most talented guys are at defensive end?’ ” Bobby Petrino said. “How are we going to get them all on the field.”

The Razorbacks have done a lot of movement with ends to inside spots the past couple of years, which will only increase their depth.

How much do the coaches need to see out of Knile Davis and other top tailbacks Dennis Johnson and Ronnie Wingo Jr.?

Not a lot. Davis is already well established after his 1,322-yard, 13-touchdown season of 2010. Johnson and Wingo have strong credentials, though they didn’t have consistent production throughout 2011 and Johnson ran into fumbling issues.

Davis ran a team-best 4.33 seconds in the 40-yard dash in testing last week and said in a university interview that he’s “ready to ride.”

The coaching staff will be wise to limit his full contact this spring and next fall after coming off his third ankle surgery. Bobby Petrino said he still hasn’t determined how much live work Davis will have.

“I mean, he’s a football player,” Petrino said. “He knows that’s what he does, and he’s very, very good at it. We expect him to come back and be full speed and ready to go.”

Kody Walker, probably the only redshirt freshman in the country who scored five touchdowns last year, is back from his shin issue and he has the big-back style Petrino favors.

What changes are in store for the offensive line?

Center Travis Swanson and guard Alvin Bailey, two of the best at their positions in the country, return, along with tackle Jason Peacock. That leaves vacant tackle and guard spots.

Brey Cook, who had an upand-down freshman season that concluded with a bout of mononucleosis, is listed with Chris Stringer and Austin Beck at Grant Freeman’s former tackle spot. Tyler Deacon, a former walk-on, is a fifth-year senior listed ahead of sophomore Mitch Smothers at the guard spot formerly held by Grant Cook.

“They got a lot stronger and more athletic in this offseason,” Paul Petrino said. “They need to understand that with Knile back, and those three backs, we’ve got to make sure we run the ball to win. So the offensive line’s got to come together.”