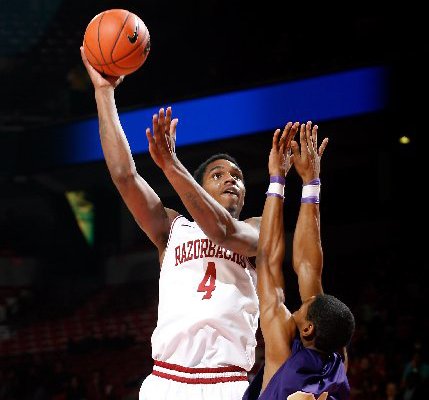 The Razorbacks scored the game's first 18 points and used a 21-2 run to close the first half to take a 56-19 halftime advantage. The Razorbacks' final margin was their largest lead.

Six players scored in double figures for the Razorbacks. In addition to the leading scorers, Dee Wagner scored 13 points, while Anthlon Bell and Rickey Scott each scored 11. Clarke and Hunter Mickelson led Arkansas with 10 rebounds apiece.

Arkansas hit 39 of 74 field goals, many of which were set up by turnovers on the other end. The Razorbacks scored 44 points off 30 forced turnovers and held LeMoyne-Owen to a 25.8 percent clip from the field.

BJ Young, a preseason all-SEC selection, did not play in the game while serving the first of a two-game suspension for a violation of team rules. Young was the Razorbacks' leading scorer last season with 15.3 points per game.

Arkansas opens the regular season on Friday with a game against Sam Houston State in Fayetteville.