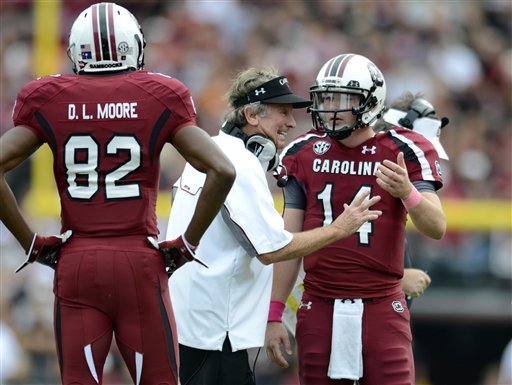 FAYETTEVILLE — South Carolina will try and finish strong after losing All-SEC tailback Marcus Lattimore to a season-ending knee injury for the second year in a row.

Lattimore had rushed for 818 yards and 10 touchdowns last season when he tore ligaments in his left knee during the fourth quarter of the seventh game, at Mississippi State. South Carolina rallied to win 14-12, then went 5-1 the rest of the way - losing only to Arkansas - to finish 11-2.

In the Gamecocks’ Oct. 27 game against Tennessee, Lattimore suffered a dislocated right knee and damage to several ligaments during the second quarter. South Carolina (7-2, 5-2 SEC) held on to win 38-35, then had an open date last weekend. It plays Arkansas on Saturday at Williams-Brice Stadium.

Lattimore finished his junior season with 662 rushing yards and 11 touchdowns. He also was the Gamecocks’ leading receiver with 26 catches for 173 yards.

“Well, we don’t know what will happen,” South Carolina Coach Steve Spurrier said of how his team will react to Lattimore’s loss. “But it was a similar time of year last year when Marcus got hurt. We do have some very good players behind him.”

“They’re two good backs,” Spurrier said. “Obviously, we hate losing Marcus, but these are two players who will fill in admirably.”

South Carolina’s top rusher now is junior quarterback Connor Shaw, who has 103 attempts for 311 yards and 2 touchdowns. He’s completed 106 of 160 passes for 1,338 yards and 12 touchdowns and thrown 5 interceptions.

Shaw has battled shoulder and foot injuries this season, but the only game he’s missed was the Gamecocks’ 48-10 victory over East Carolina.

“His play overall has been good,” Spurrier said. “He struggled at LSU and at Florida. Most people do struggle, I guess, in those places. But other than those two games, he’s played well.”

“We’re out of the [SEC] championship game, we know that,” Spurrier said. “We had to hope Georgia and Florida would lose last week, and that didn’t happen. But we didn’t have a lot of hopes that would happen to tell you the truth.

“After we lost at Florida, we sort of readjusted our goals to trying to win 8, 9, 10 games like we did last year. So we’re going one game at a time.

“We’re still having an excellent season here. .. We’re going to try to finish strong. The team finished very strong last year to go 11-2. I don’t know if we can do that or not, but obviously that would be the goal.”

“We feel like we’ve got two defensive ends, maybe as good as any two in the country,” Spurrier said.

Senior outside linebacker Shaq Wilson leads South Carolina with 54 tackles and has 2 of the team’s 10 interceptions. The Gamecocks’ cornerbacks and safeties have a combined four interceptions.

“Secondary wise, we’re hoping to get more turnovers than we’ve been getting,” Spurrier said. “We haven’t been getting too many lately. But that’s about where we are.”

The Gamecocks are fourth in the SEC in total defense (303.2 yards per game) and rushing defense (104.6) with defensive coordinator Lorenzo Ward, a former Arkansas assistant, making the calls, but Spurrier was unhappy about Tennessee’s 381 passing yards.

“Our pass defense was the worst it’s been all year, and we know Arkansas is an excellent passing team,” Spurrier said. “One of the best we’ll play all year.

Up next ARKANSAS AT SOUTH CAROLINA WHERE Williams-Brice Stadium, Columbia, S.C.