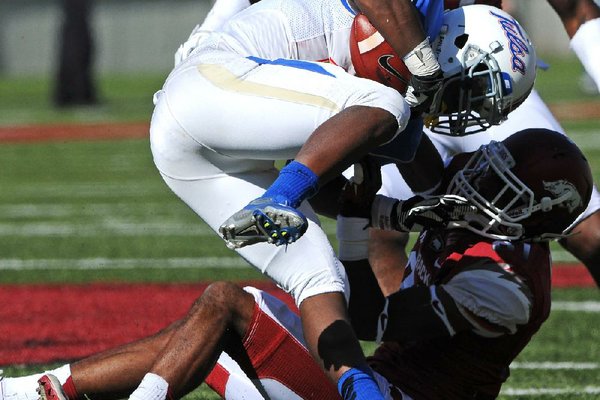 FAYETTEVILLE — Arkansas will become the first SEC member to host Michigan in football when the programs meet for a two-game set of season opening games beginning in 2018, the schools announced Tuesday.

The series is scheduled to begin Sept. 1, 2018, in Ann Arbor, Mich., and conclude Aug. 31, 2019, at Reynolds Razorback Stadium in Fayetteville. Michigan has never played at the venue of an SEC opponent since the conference was formed in 1933.

Arkansas Athletic Director Jeff Long has said that Texas A&M’s entry into the SEC would give him more flexibility on scheduling a marquee opponent, and in Michigan the Razorbacks have landed the all-time winningest program in the college ranks with 902 victories.

“The home-and-home series will feature matchups between two tradition-rich programs representing two outstanding conferences,” Long said in a university release. “As a program, we will continue to look for opportunities to schedule high-profile nonconference opponents to further enhance our national profile and complement our competitive Southeastern Conference schedule.”

Arkansas and Michigan have played only once, with the Wolverines winning 45-31 in the 1999 Florida Citrus Bowl. The Razorbacks have not faced a Big Ten opponent in the regular season since defeating Northwestern 38-7 on Sept. 19, 1981.

Arkansas tailback Knile Davis practiced Tuesday, but offensive coordinator Paul Petrino said his availability for Saturday’s game at South Carolina is a long shot based on what Petrino said he saw. Davis injured a hamstring against Ole Miss on Oct. 27 and did not play in last week’s 19-15 victory over Tulsa.

Tight end Chris Gragg (leg/knee) was not seen during the open portions of practice, nor was linebacker Terrell Williams, who has been suspended indefinitely after being arrested and charged with driving while intoxicated Sunday.

Receiver Brandon Mitchell took a couple of reps with the starters on offense, but his status is still unknown while school officials look into his eligibility.

Freshman Nate Holmes, who had practiced with the cornerbacks for several weeks, is back on the tailback depth chart for a second consecutive week because of injury problems.

South Carolina quarterback Connor Shaw’s rehabilitation from a sprained foot kept him in the slow lane as the Gamecocks began preparations for Arkansas.

“He was gimping around last night in practice,” South Carolina Coach Steve Spurrier said at his Tuesday news conference. “He stood in the pocket and caught it and threw a few, but he couldn’t run last night. Hopefully by the middle of this week he’ll be full go.”

Reserve quarterback Dylan Thompson has recovered from a triceps injury.

Top defensive end Jadeveon Clowney’s practice time has been sliced because of a foot injury, but Spurrier said he’ll be ready by Saturday.

“I think when the season’s over, there’s a type of surgery they can do that fixes it,” he said. “It’s not painful right now, but he doesn’t practice all that much. ... He goes about half the time, but he’s OK on Saturdays.”

South Carolina will have a ceremony Saturday to recognize Marcus Lattimore as the school’s touchdownscoring leader. Lattimore, who had season-ending knee surgery last Friday for the second time in two years, will be in attendance.

“I think our fans need to know that Marcus will be here, and I’m sure he’ll get an ovation maybe like there’s never been one at Williams-Brice [Stadium],” Coach Steve Spurrier said.

Arkansas Coach John L. Smith said he attributes none of the team’s five arrests to the transition from Bobby Petrino to him in April.

“I don’t know, maybe the way they were handled is somewhat different,” Smith said. “But here’s the deal: They’re your guys, our guys. We love and care about them.

“I guess the point that hurts is when they make a mistake that you can’t correct it or we fail to correct it, and consequently having to divorce, which we’ve had to do. That’s the point, as a coach, you look at yourself and say, gosh, you’ve failed. And that’s what you do. You look in the mirror and say we failed that guy.”

The Razorbacks under Smith dismissed linebacker Tyler Gilbert and offensive players Maudrecus Humphrey, Andrew Peterson and Marquel Wade, all of whom were originally charged with burglary. Linebacker Terrell Williams is on indefinite suspension since his overnight Saturday arrest on DWI and other driving-related charges.

Arkansas has been the first team to 10 points in each of the past six games, but those early leads did not hold up in losses to Rutgers, Texas A&M and Ole Miss.

The Razorbacks have outscored their past six opponents 75-7 in the first quarter, but that early momentum hasn’t lasted. In the second quarter of those games, Arkansas has been outscored 67-27, with 14 of the Razorbacks’ points coming in a 49-7 victory over Kentucky.

“It seems like every week it’s 10-nothing,” Wilson said. “Everybody that watches our team, it’s like, ‘OK, here we go again. It’s 10-nothing.’ And we’ve got to flip the switch and ... everybody uses the term ‘put it away’ or ‘finish the jugular’ or whatever.”