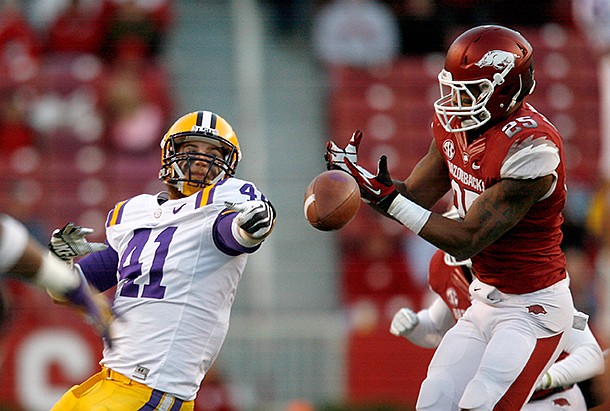 FAYETTEVILLE — In a year that was anything but predictable, Arkansas' finale against No. 7 LSU played out much the same way as the Razorbacks' other seven losses.

There were turnovers committed and none forced. There were untimely penalties. There were head-scratching coaching decisions.

LSU won 20-13 in their first trip to Fayetteville in two decades, capitalizing enough on a plethora of Razorbacks mistakes that came to define the 4-8 season - the most disappointing in program history.

Several of those mistakes came in the first half, when Arkansas continually undid its own good.

Brandon Mitchell committed a personal foul with a late hit following a big gain on the first drive to the LSU 6. Dennis Johnson fumbled the ball at the Tigers' 2 a couple of plays later. The Razorbacks' bench was called for unsportsmanlike conduct during a timeout before a third down to aid LSU's only first half touchdown drive. Zach Hocker missed two field goals.

Instead of leading by 10 or more at halftime, Arkansas found itself down 10-0 at the intermission.

If Friday were a tale of two halves, both ended in frustration for Arkansas. The Razorbacks had their best defensive performance unravel in the final minutes and scored only three times - twice on field goals - in eight trips to LSU territory.

Arkansas tried not to leave points on the field in the second half, but by playing as if it had something lose, might have cost itself the game.

Trailing 17-10 and facing fourth-and-goal from the LSU 1, John L. Smith opted to trot back-up kicker John Henson - who replaced a healthy Hocker in the second half - onto the field for a chip-shot field goal.

The kick pulled the Razorbacks within four points and Smith later attempted to justify what he deemed "the right call" by saying Arkansas needed two scores to beat the Tigers. It nearly worked out for the best moments later when Trey Flowers stripped and recovered what appeared to be a Zach Mettenberger fumble deep in Tigers territory, but the play had been blown dead before the snap because of an illegal procedure on the offense.

Arkansas got the ball back on a punt and moved into opposing territory again, but Smith opted to punt facing a fourth-and-5 from the LSU 45 late in the game, turning the game over to a defense that played above its head to that point against an offense that finds a way to play to the level of its competition.

The defense couldn't find the final necessary stops, though. After the Tigers converted the first third down of the drive, Odell Beckham Jr.'s 47-yard reception on a third-and-10 put LSU in range to extend the lead to 20-13 and force the Razorbacks to use their final timeouts.

Tyler Wilson led the team 60 yards in 1 minute, 20 seconds, but after a completion to the 18, the final pass of his record-setting career went awry in the end zone. Arkansas never found its second score.

Credit the Razorbacks for playing well at a time they could have easily packed it in. Several of Arkansas' top players - Tyler Wilson (359 passing yards), Cobi Hamilton (98 receiving yards), Knile Davis (83 all-purpose yards) and Chris Smith (1.5 sacks) - had some of their best games of the season.

Those performances helped Arkansas continue to provide entertainment in a series that hasn't lacked it the last dozen years or so. Since 2000, only three games between these programs have been decided by more than 11 points, with the favorite often prone to upset.

Though unlikely, LSU - which needs an Auburn win over Alabama on Saturday - could still make the SEC Championship Game and sits pretty in the eyes of the BCS. The Tigers won their 10th game for the sixth time in Les Miles' underrated 8-year tenure.

Arkansas had its chances to keep that from happening Friday, but like other games in 2012, lost to itself en route to losing to its opposition.