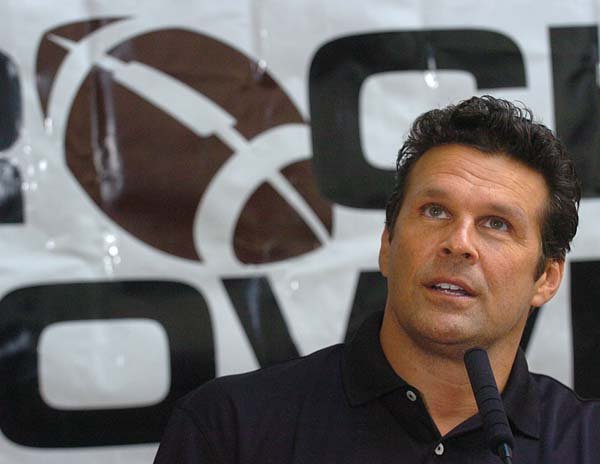 David Bazzel, president of the Little Rock Touchdown Club, announcing Tuesday this year's speaker line-up at a news conference held in the lobby of the Metropolitan National Bank Building in Little Rock.

A large crowd gathered Tuesday in the atrium at Metropolitan Bank.

Hot dogs and hamburgers were being served, but every person was there for one reason. They wanted to hear who the speakers will be this fall at the Little Rock Touchdown Club, which attracts visitors from all over the state.

As Lunsford Bridges, president and CEO of Metropolitan Bank and the presenting sponsor of the weekly Touchdown Club luncheons, introduced David Bazzel, the thought occurred again of what a difference Bazzel has made in his adopted state.

He came here to be an Arkansas Razorbacks football player and has become an ambassador, innovator and good citizen.

Bazzel created the Broyles Award, the Golden Boot -which is given each year to the winner of the Arkansas-LSU game - and the Little Rock Touchdown Club, and helped found the Northwest Arkansas Touchdown Club.

No wonder he is on the voting list for the Arkansas Sports Hall of Fame.

Tuesday’s news conference was more like being invited to a friend’s house for a glass of wine, only to discover they were serving Presqu’ile Pinot Noir, one of the premium wines produced in the United States.

The 10th year will be the best for the LRTDC.

Just a year ago, in a meeting at Corky’s restaurant, Bazzel told his board that he was tired and needed help. Everyone in the room agreed to help. We all know how many hours he has put into this organization - for free - and it has become, according to past speakers, one of the best football clubs in America.

Instead of getting help, he went out and came back with the best lineup of speakers ever, and even added four new awards that will honor some great football players born in Arkansas as well as longtime sports broadcaster Steve Sullivan.

Aug. 21: Bret Bielema, head coach of the University of Arkansas.

Sept. 9: Tom Osborne, the former head coach and athletic director at the University of Nebraska.

Oct. 14: Mitch Mustain, the former Arkansas and Southern Cal quarterback, who is featured in a compelling new documentary The Identity Theft of Mitch Mustain.

Nov. 18: Richard Davenport of the Arkansas Democrat-Gazette and Chris Hays of the Orlando Sentinel, both of whom report on recruiting.

The February banquet will feature Lou Holtz, who was head coach at Arkansas and Minnesota before winning a national championship at Notre Dame. He now works as an ESPN studio analyst.

Bazzel spent so much of the summer working on speakers and the new awards that he felt compelled to apologize to his girlfriend, Shantell Kelly, twice during the news conference.

No doubt he has again put in countless hours to help his home state and community.