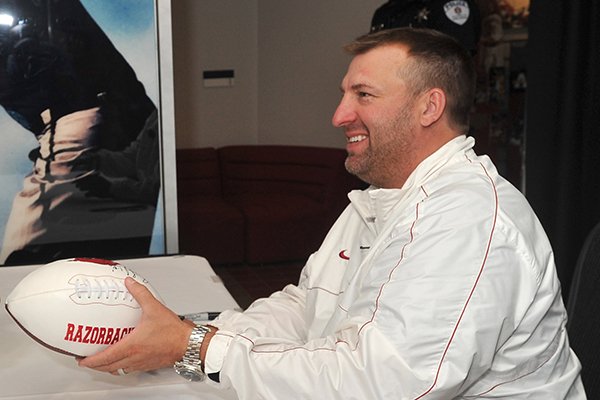 The news of Tate’s injury, which occurred Wednesday, had not been released by Arkansas, though Bret Bielema said Saturday evening he was planning to announce it after the team’s Saturday night scrimmage.

Bielema said he has a detailed approach to releasing information that he goes over with his players, coaches and media relations staff and “I forgot to review this with the Auburn staff as well.”

Bielema said he had a phone conversation with Horton, whose job status with the Razorbacks had been in limbo for several weeks after Bielema took over Dec. 5, late Friday night.

“I expressed that we would like to handle our injuries in-house, and I know he’s got a relationship [with Tate] and all that’s great, but I don’t think we will have that problem moving forward,” Bielema said.

“We will take care of it and appreciate their support, and we will see them later this year.”

Bielema described his talk with Horton as “a very nice conversation.”

The Arkansas Razorbacks, who signed autographs for a couple of hours on fan day at Bud Walton Arena on Sunday, get back to practice today to start the final week of work before classes begin and game week commences for the Aug. 31 opener against Louisiana-Lafayette.

Arkansas has had two scrimmages at Reynolds Razorback Stadium,including the Hogs’ 6 p.m.

workout Saturday that paralleled its Week 2 kickoff time against Samford in Little Rock.

The Razorbacks’ workouts this week are scheduled to be closed, as they were all last week. But fans are welcome to attend Arkansas’ kickoff luncheon Friday at the NWA Convention Center in Springdale. Doors open at 11:15 a.m. for the noon program, and tickets are $25 each.

ESPN analyst and UA graduate Jimmy Dykes will emcee the event, and Coach Bret Bielema will preview the season.

Coach Bret Bielema said defensive tackle Byran Jones (foot) and safety Rohan Gaines (knee) returned to practices last week after center Travis Swanson (groin) came back earlier in the week. Fullback Kiero Small is slowing making his way back from foot injury suffered during the first week of camp, and receiver Keon Hatcher (hamstring) is expected back some time this week. Senior receiver Javontee Herndon has been slowed this week,Bielema said, but is expected back soon. The nature of the injury has not been disclosed.

Bielema, pointing toward Tate’s possibility for a professional career after the season, made sure to clarify that his current shoulder surgery had nothing to do with his previous surgery on the same shoulder.

Defensive coordinator Chris Ash said he wanted more flexibility to open up the Hogs’ blitz packages in Saturday’s scrimmage and he got his wish.

“There definitely was more blitzing,” Bret Bielema said. “Probably more than I would like. Coach Ash has a tendency to get heavy-handed when he gets frustrated, and there was a lot of them out there, but it was productive.

“We were having a tough time, especially with the No. 2 group, picking it up.”

Tight end Austin Tate will remain on Arkansas’ 105-man roster despite recovering from shoulder surgery because he’s so important to the position, Coach Bret Bielema said.

Removing a player from the 105-man roster means they cannot participate in meetings with the team, but because the senior Tateis expected back in a few weeks, the coaching staff wanted him around daily through the start of school next week.

“We’re going to keep Austin in the meetings just because he’s going to be [back] sooner rather than later, and he’s the glue to that room.”

Bielema said linebacker Otha Peters, because he is expected to miss 6 to 8 weeks with a broken arm, will be removed from the 105 to make room for a walk-on to begin practicing.

Junior-college linebacker Martrell Spaight isn’t the biggest Arkansas linebacker, but he might be the hardest hitting one.

Spaight, listed at 6-0, 225 pounds, is working second team strongside linebacker behind Braylon Mitchell, and has delivered multiple big hits in his first camp with the Hogs.

“Spaight, we’re going to put in a green [caution] jersey just because he keeps hurting everybody,” Bret Bielema said. “I think he has [caused] three concussions this week and bruised one guy’s butt because he knocked him on his ass so hard. He’s got a gift”

Reserve quarterback and place-kick holder Brian Buehner has agreed to move to receiver with the loss of senior Demetrius Wilson last week.

“He could have easily just stayed there as probably the No. 3 quarterback … but he said to me, ‘Coach, I’ll do anything to help this team,’ ” Bret Bielema said. “We threw him in at wideout just to experiment, and the first day he didn’t have a drop.

“He had one out there [Saturday], but he’s been money.”