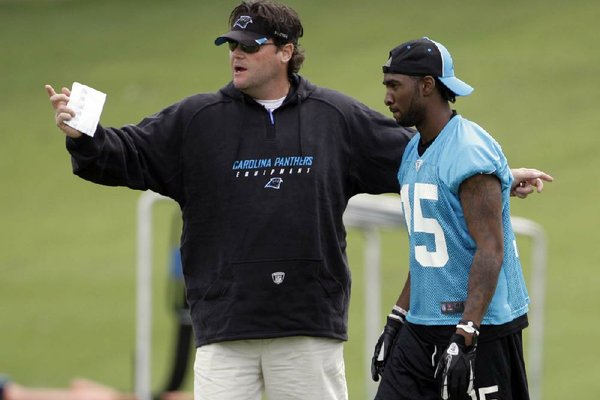 Carolina Panthers special teams coordinator Brian Murphy (left), working with receiver Joe Adams (Arkansas) during a preseason minicamp, was fired by Panthers Coach Ron Rivera on Monday after the team gave up a 76-yard punt return for a touchdown to Trindon Holliday in Sunday’s 36-14 loss to the Denver Broncos.

CHARLOTTE, N.C. (AP) — Panthers coach Ron Rivera says the team has placed Jonathan Stewart on the physically unable to perform (PUP) list, meaning the veteran running back will miss at least the first six weeks of the season.

Stewart says his goal is to return for Carolina's Oct. 20 game against the St. Louis Rams.

Stewart hasn't practiced with the Panthers since undergoing offseason surgery on both ankles. He says his right ankle remains a problem.