Points up, fouls down through 7 games 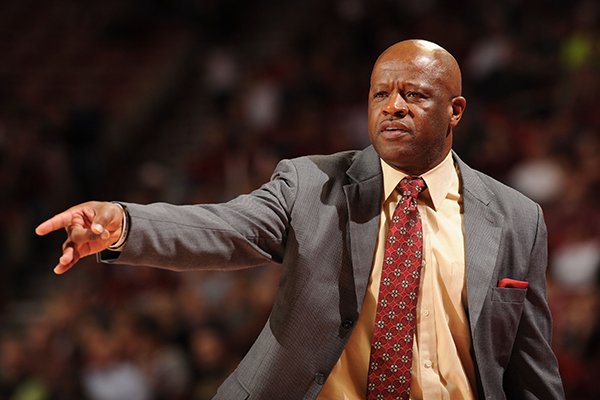 Arkansas coach Mike Anderson directs his players from the bench during the second half of play against Southern Methodist Monday, Nov. 18, 2013, in Bud Walton Arena in Fayetteville.

FAYETTEVILLE — Mike Anderson had a lot to say during the off-season about his three-year plan.

After taking over a downtrodden program at Missouri, Anderson made the NCAA Tournament in the third year with the Tigers. When he was an assistant coach at Arkansas under Nolan Richardson, the Razorbacks made the NCAA postseason for the first time in year three.

So Anderson, now in his third year back at Arkansas, has high expectations for his team this season. Through seven games, it appears the 5-2 Razorbacks are getting closer to reaching those, especially on the offensive end.

Against comparable competition, Arkansas' points are up 6.5 per game through seven games from last year while the percentage of points scored from free throws has remained essentially the same. Statistically, the Razorbacks are shooting the ball 4.6 percent better from a year ago, including a more than 10 percent increase from beyond the arc.

"We've got more quality players and we share the basketball," Anderson said. "We've got more balance. People can't center on your leading scorer. I think when you have balance that makes a big difference. Our leading scorer is Michael Qualls and he came off the bench the other day (in a 111-65 win over Southeastern Louisiana).

"Those points add up when you have the balance and depth we have. We still want to get to the free throw line. Through seven games we've been shooting the ball fairly decent. My biggest deal is our defense. I thought the other night against Southeastern Louisiana we kind of zeroed in and stopped them from getting to the offensive glass and making it difficult for them to score, especially in the second half."

Anderson credits the Razorbacks' defense for the team's offensive success - a Southeastern Conference-leading 88.6 points per game - early this year. Even with a greater emphasis on hand-checking increasing personal fouls nationwide, Arkansas' fouls are down from this point last season and the Razorbacks have committed 29 fewer fouls than their competition.

Junior guard Rashad Madden said the hand-checking emphasis has made the Razorbacks more aware of playing defense with their feet instead of their hands.

"It kind of scares us to get up and pressure like we normally do, but Coach Anderson doesn't really mind at all; he just tells us to get up and play, and whatever happens is going to happen," Madden said. "See if the ref is going to let us get away with a hand check. If they do then we can do it, and if they don't we just can't.

"Our defense helps a lot so we don't have to come down and run plays like everybody else. If we get a steal or a missed shot we don't' have to stop, we just go. That just puts pressure on them from both ends. When it's time for them to play defense, they're a little bit more tired."

Crediting only the defense for the Razorbacks increased offensive effort would be a disservice, Anderson said. Arkansas has improved its play on the offensive end from a year ago with better shooters and better team play.

The Razorbacks also have better depth. Arkansas played only 10 scholarship players in Anderson's first year and 11 last season. There are 12 eligible this season and walk-ons like Kikko Haydar and Fred Gulley are being relied on as much as scholarship players, with both starting Tuesday.

"We're moving the basketball," Anderson said. "The ball is not getting stuck many times with this basketball team. And we're throwing it inside, going inside out and the guys are shooting with confidence. I think you're seeing more guys and the wealth is being spread around. The guys that are our leading scorers are going to have their nights, but there are going to be nights where Kikko, Fred Gulley and Jacorey Williams are going to score for you."

Despite what appears to be an improved team, Anderson expects more. He'll quickly point to losses against Cal and Gonzaga in Maui as examples of how far the Razorbacks have to go against top competition.

Arkansas was out-rebounded by 19 in the loss to Cal and Gonzaga guard Kevin Pangos scored a career-high 34 points in the game against the Razorbacks.

"I expect a lot of us to tell you the truth," Anderson said. "Even going to Maui, the record we came back with was not the one I envisioned. I think the experience alone is what benefitted us. I thought it benefitted us the last game. Hopefully it's something we can continue to strive to get better in the areas we were deficient in Maui."

But quality wins over the likes of SMU and Minnesota, and blowout wins like the one against Southeastern Louisiana on Tuesday have shown Anderson that Arkansas isn't too far off from where he envisioned the team in the three-year plan.

"We're trying to put those pieces together, make sure we can put the right people out there at the right time and see depth continue to develop," Anderson said. "The depth, people coming off the bench and lifting us up is really starting to happen."