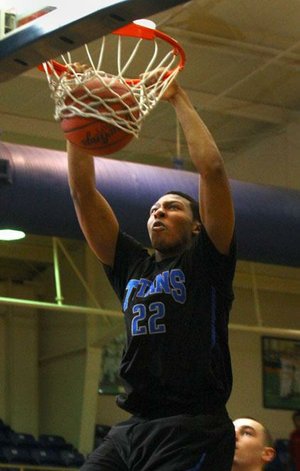 7/11/12 Arkansas Democrat-Gazette/STEPHEN B. THORNTON King McClure of the Texas Titans slams the ball home during their game against the Arkansas Soldierz in the AAU tournament in Little Rock last summer.

Junior shooting guard King McClure, 6-31/2, 208 pounds of Triple A Academy in Dallas has Arkansas as one of his top six schools. In no particular order, he lists the Razorbacks, Baylor, Texas, Kansas, UCLA and Duke.

McClure said he talks to Coach Mike Anderson and associate head coach Melvin Watkins on consistent basis. Style of play and a school that can make him better on and off the court is what he's looking for in a school.

Future150.com rates McClure the No. 12 prospect in the 2015 class. Read more in Friday's Arkansas Democrat-Gazette.

He's officially visited all but Missouri. He plans to announce his decision at the U.S. Army All American game on Jan. 4.

Arkansas guard signee Nick Babb of Arlington Martin will participate in the Orange bracket of the Whataburger Basketball tournament Thursday to Saturday at the W.G. Thomas coliseum in Haltom City, Texas.

Jonesboro High School is in the same bracket. For more info CLICK HERE