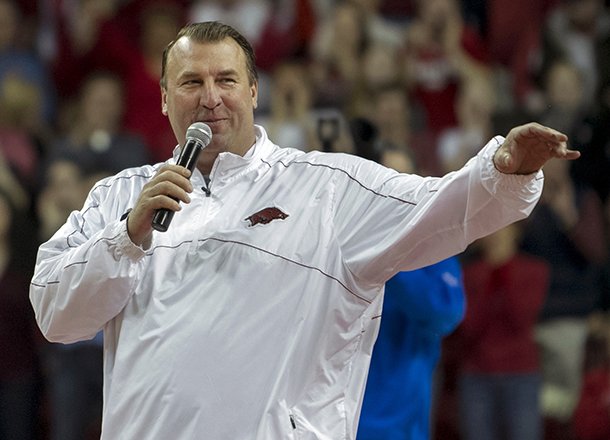 FAYETTEVILLE — Arkansas beat Tennessee on the hardwood Saturday, but it was new Razorbacks' football coach Bret Bielema who stole the show early in the game.

Bielema was introduced during the third media timeout of the first half at Bud Walton Arena, drawing a standing ovation from the crowd of 14,029 on-hand.

"I came here to tell you how over the last six weeks, how excited I have been to be here," Bielema said, "…and we've assembled a staff that is second-to-none."

"We came to Arkansas for all the same reasons. We didn't come here to play in the SEC, we came here to win the SEC."

It was Bielema's first introduction at a sporting event since being hired as the Razorbacks' coach on Dec. 4. Arkansas had multiple football recruits in attendance at the game.

Former Razorbacks basketball coach Nolan Richardson was also honored during halftime of Arkansas' 73-60 win. Richardson, who won the school's only national championship in 1994, was introduced alongside a painting of him holding the title trophy.

The painting, which will be auctioned, is one in a series of artists' renderings honoring national championship teams as part of the 75th anniversary of the NCAA Tournament. Opie Otterstad, the artist of the Richardson drawing, and UA chancellor G. David Gearhart were also on-hand.

It was just the third time Richardson had been introduced at the arena since being fired in 2002 and first time this season.