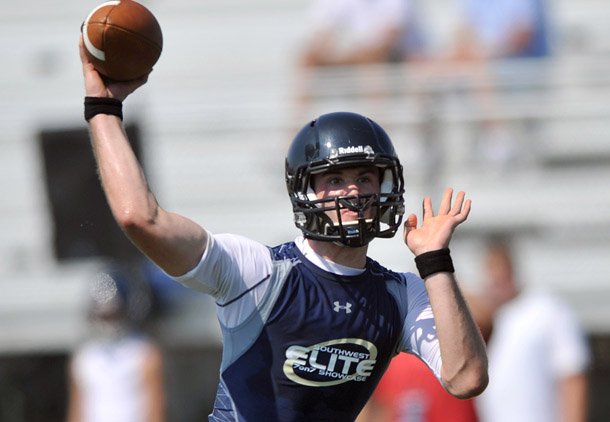 Charleston junior quarterback Ty Storey has committed to Arkansas and becomes the Hogs' first pledge for the 2015 class.

Storey, 6-3,217, 4.92 seconds in the 40 yard dash, chose the Hogs over scholarship offers from Alabama, Auburn and Arkansas State. He was named to the Arkansas Democrat-Gazette Super Sophomore team after completing 328 of 503 passes for 4,397 yards and 46 touchdowns.

Only Rhett Lashlee of Shiloh Christian, who threw for 4,546 yards in 1999, has thrown for more yards as a sophomore in Arkansas. Sophomore highlights click here

Storey said he told Coach Bret Bielema and offensive coordinator Jim Chaney of his commitment last night. He said the Hog coaching staff reached out to him and helped him through the whole recruiting process on and off the field. He said he's ready to start recruiting for the Razorbacks.

Elite 11 coach and ESPN analyst Trent Dilfer's comments on Storey after seeing him at the Dallas Elite 11 Quarterback Regional Camp at the Dallas Cowboy's practice facility on April 6. He was surprised to know Storey was just a sophomore at the time and was considering advancing him to the finals of the Dallas event until realizing Storey wouldn't be a senior in the fall.

"Big physical kid," said Dilfer of Storey. "A real good learner. You could tell he was taking everything in. Again, when I found out he was a sophomore I didn't pay as much attention but when I was watching earlier one I was impressed that he's four and half months off ACL."