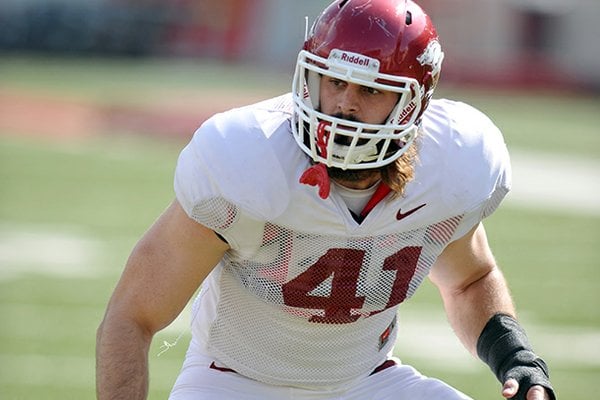 Flynn, who transferred to the Razorbacks from Los Angeles Harbor College last January, played as a backup last season. He recorded 10 tackles, including 1.5 sacks, playing in all 12 games.

The California native was arrested last month on charges of driving while intoxicated. Bielema said Flynn's decision to transfer was because of academics.

Flynn was listed on the team's spring roster released last week. Tight end Brett Weir was the only player not listed from last season's roster who didn't graduate or declare for the NFL Draft.

Bielema spoke briefly about the team's first day of spring practices held Sunday at the Walker Indoor Pavilion, calling it a good start.

"We went inside and made the first audible of the day; we were going to go outside but the weather didn't permit it, so it was nice to have the facility," he said in an interview posted online by KNWA-TV. "I thought the kids brought great energy and they were very open to coaching. I thought the execution was great.

Bielema said Arkansas finished the day "relatively injury free" but didn't elaborate. Asked if there were any surprises, he said no.

"Any time you're seeing players physically for the first time, seeing them get lined up and react to what you're telling them to do, that's a little unique."

Bielema said the first couple of practices are "predicated more toward the defense." He said he was excited about the team's collective attitude during the first day of practice and came away with "two or three pages of notes about things other than Xs and OS."

During one point in practice he huddled the team together because some members left garbage on the ground after a water break. He said it was a simple way to teach discipline to his players.

"They've got to learn you have to do things right to have success no matter what you're doing," he said.

Arkansas' spring practices are closed to the public this spring and will be open to the media three times before the annual Red-White Game on April 20. Bielema is scheduled to hold his first press conference Friday since practices began.