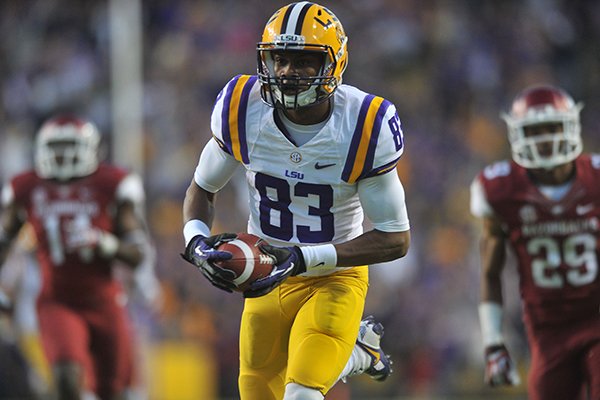 Instead, the outcome was an all-too-familiar one for the Razorbacks, a 25-point underdog who lost their ninth straight game in heartbreaking fashion.

Anthony Jennings' 49-yard touchdown pass to Travin Dural on third down with 1:15 remaining gave No. 15 LSU a 31-27 comeback win over Arkansas at Tiger Stadium. The Razorbacks finished the season winless in Southeastern Conference play for the first time and extended their program-record losing streak into next season.

Jennings' pass capped a 99-yard drive in less than two minutes after Arkansas downed a punt at the LSU 1. Jennings, a freshman backup, had entered the game for senior starting quarterback Zach Mettenberger one possession earlier when Mettenberger was injured. Jennings found his freshman receiver well behind Arkansas' secondary for the score, which sent an announced crowd of 89,656 into a frenzy as night fell on Death Valley.

TURNING POINT: Anthony Jennings threw a 49-yard TD pass to Travin Dural with 1:15 remaining to give LSU a 31-27 lead

NOTABLE: Arkansas finished the season without a SEC win for the first time

"We were in a deep-path coverage, had a deep-path player, but it obviously wasn't there. The only thing I asked them to do is take what you learned here and take it home with you. Don't leave in here in Baton Rouge or we'll never overcome where we are at right now."

Allen's 2-yard touchdown pass to Hunter Henry with 50 seconds left in the third quarter gave the Razorbacks a 27-21. The pass capped a 15-play, 75-yard drive that was extended when punter Zach Hocker drew LSU offsides on a fourth-and-3.

Arkansas (3-9, 0-8) took a 17-14 halftime lead when Hocker made a 20-yard field goal on the last play of the first half. The score was set up when Razorbacks linebacker Braylon Mitchell sacked and forced a fumble by Mettenberger, recovered by Brandon Lewis at the Tigers 29.

"We go into every game thinking we are going to win," said Arkansas middle linebacker Brooks Ellis, who had 10 tackles. "We kept rolling on the momentum and getting turnovers, but we just couldn't come up with it (in the end)."

Hocker added a 29-yard field goal early in the third quarter to extend Arkansas' lead to 20-14. But LSU capitalized on the Razorbacks settling for field goals and regained the advantage on a 52-yard touchdown run by Jeremy Hill midway through the third quarter.

The Tigers reached the Arkansas 18 early in the fourth quarter, but a pass from Mettenberger to Hill on fourth-and-2 netted only 1 yard and the Razorbacks took over on downs with 9:20 remaining.

Arkansas didn't record a first down, however, in the fourth quarter, allowing the Tigers multiple chances to tie or take the lead. The Razorbacks, which finished the game with 360 yards of total offense, had only 24 yards on eight plays in the final quarter.

"I thought this whole game we had it going," Allen said. "We had it clicking on offense. The run game and pass game had certain things going for us. We were able to put up a few points and unfortunately we needed a few more.

"I think it we get (a first down) maybe there wouldn't have been enough time on the click left for them."

Terrence Magee had touchdown runs of 29 and 23 yards in the first quarter as LSU built a 14-7 lead. Arkansas nearly answered Magee's first touchdown in one play, but Korliss Marshall's 100-yard kickoff return touchdown was overturned because of a holding penalty.

The Razorbacks eventually tied the game 7-7 on a 3-yard touchdown run by Kiero Small before Magee regained the lead for LSU on his second scoring run.

Allen's first touchdown pass to Henry from 9 yards out tied the game 14-14 for Arkansas with 6:14 left in the second quarter. The score came one play following a 42-yard run by Javontee Herndon on a third-and-1.

A Marshall 32-yard run set up the Razorbacks inside LSU territory with less than 4 minutes left in the first half, but Allen was intercepted on the next play by Jalen Mills in the end zone. Allen finished the game completing 19 of 29 passes for 182 yards and 2 touchdowns, but also committed two turnovers.

Hill had 145 rushing yards for LSU. Jarvis Landry added 8 catches for 113 yards, including an acrobatic 32-yard reception to set up the Tigers' fourth quarter field goal. Mettenberger was injured on the play on a low hit by Byran Jones.

"A really nice throw and Jarvis Landry puts us in a position to score with a great catch," LSU coach Les Miles said. "This group, there is just something about them. They're competitive, they want to play, they make plays and no matter what the scenario, I would never count them out."

The loss was Arkansas' 12th straight in conference play. The nine losses are the most ever in a single season for the Razorbacks.

"I think our guys expected to win," Bielema said. "We didn't try to stay close. I think they prepared from last Sunday to today and they expected to win. They may have shocked everybody else but our guys...the reason they are gutted right now is obviously because they are hurt. They fully expected to win the game as well as I did, and that's the way we will train them going forward."