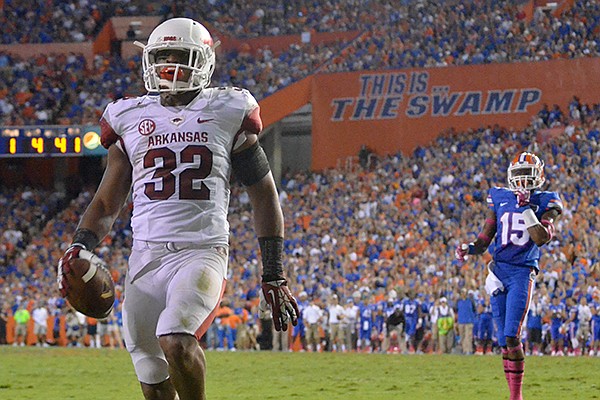 Arkansas running back Jonathan Williams runs for a touchdown in the first quarter of a Saturday, Oct. 5, 2013 game against Florida at Ben Hill Griffin Stadium in Gainesville, Fla.

The rushing defense. By rushing defense I’m referring to the defensive front against the downhill running game of Florida, not Murphy’s scrambles. The Gators’ top two running backs averaged 2.9 and 3.5 yards per rush, totaling 89 yards in 28 carries with zero touchdowns. Through six games, Arkansas leads the SEC with just five rushing touchdowns allowed.

Brandon Allen. Rough outing for Allen in his first career road start. Allen finished 17 of 41 for 164 yards with an interception and a lost fumble. It’s easy to say that the Razorbacks threw the football way too many times (43 total) but at the end of the day, the Razorbacks averaged a dismal four yards per attempt.

The pass defense. Yikes. The Razorbacks were exposed as simply slow in the back seven. The cornerbacks, Mitchel and Hines, play with good technique and are only occasionally beaten, but the safeties and linebackers are both slow and often out of position. In a familiar theme over the last ten or more years, the Hogs made a very mediocre (if not just plain bad) quarterback look like a world-beater.

The wide receivers. Wide receiver issues that date back to the Petrino era reared their ugly head on Saturday: against good secondaries, Hog receivers fail to get any kind of separation and drop easy passes. There is also a deeper issue, discussed in the film review below.

Fair-catch rules. The call that everyone is thinking of appears to be less of a bad call and more of a bad rule. Who knows what the logic is behind that rule? The ball bounced out of the return man’s hands and Jarrett Lake’s best option at that point was to vaporize. It didn’t help that immediately following the play, the twitter handlers of two twitter accounts—ESPN’s college football “rules expert” and a director of SEC officials—tweeted out different and even contradictory responses. The rules expert’s explanation ended up being incorrect. Oops.

Florida’s defense. Florida’s defense is nasty in a couple of ways. Leading the SEC in nearly every statistical category, the Gators simply put the clamp down on the Hog offense after a shaky start. Florida has a chance in every game they play because of that defense. However, the nasty goes another way. Four second half personal fouls (three by the defense) were unnecessary and perhaps even dirty. A Gator offensive lineman was ejected after diving for Jarrett Lake’s legs and then bumping an official, and the Florida defense hit Brandon Allen after his release three times (a la 1991 Cotton Bowl).

Film study will be a little different this time. Here’s the number one question fans are asking about the team.

“What’s up with the receivers?”

Crafting an offense around the skill of a team’s wide receivers is more complex than what it appears to be on the field. Arkansas’ receivers had a bad game against Florida, but weren’t overly impressive against Rutgers and Texas A&M either.

Different teams use different terminology, but here the basic descriptions of the receiver spots.

X = possession. X receivers are tall, physical, and hard to cover. They are often the best receivers on the team. They usually run medium-to-deep routes and always line up on the outside. Examples: George Wilson, Marcus Monk, Greg Childs

Y = slot. Quick with strong hands is the best definition. The Y is always an inside receiver. Ys are usually very good route runners, especially over the middle. Examples: Jarius Wright, Joe Adams

Z = balanced. Zs come in a variety of sizes and skill sets, but by definition they are always opposite of the X, usually as a flanker. They run a large variety of routes, but they tend to be the deep threat of the offense. Examples: Richard Smith, Cobi Hamilton

Because the X is usually a mix of size and speed, he’s the hardest to cover, so the coverage is “rotated” against the X so that there are extra defenders able to help in coverage against the X. Typically, a safety is nearby on the X side, because of the mismatch, but not always on the Z side.

In 2012, the Razorbacks used the following depth chart:

When Cobi Hamilton graduated, Herndon stepped up as the starter at the Z spot. Herndon has a decent mix of size (6’1), speed, and hands to play the Z. Horton and Hatcher are quality inside receivers.

The problem, then, should be obvious. Wilson beat out McKay at the X spot, and McKay transferred. Then Wilson tore his ACL in the fall. The injury has been critical as it has left the Razorbacks without a true possession receiver. Herndon is not a good fit at the X. When he’s taking on the defense’s top cornerback with safety help over the top, he can’t get open. If he were back at the Z, facing softer coverage, he could get more open.

When defenses see Herndon at the X, they react one of two ways. 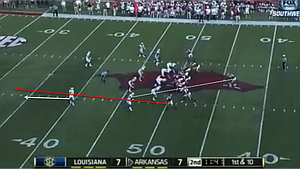 Here’s Louisiana-Lafayette trying it in the first quarter of that game. Notice the eight in the box, and that no special attention is being paid to Herndon. He’s able to fly past the lone safety and haul in a 49-yard touchdown pass on a diving catch. That kind of play is one a Z receiver would make: a deep pass against soft coverage. Because the Cajuns didn’t take an underneath-deep coverage typically given to an X, Herndon is able to flourish like a Z receiver. When SEC defenses like Florida’s are able to stop the run with just seven men, however, they can completely take Herndon out of a game.

Knowing that defenses capable of stopping the run with seven men would take Herndon out of the picture, the coaches started trying to find good Y and Z options to step up. When the Razorback offense sputtered much of the game against Samford, much of the passing game struggles were due to Chaney and the offense coaches desperately trying to give Julian Horton a chance to become a threat (he led the team in targets that game). Horton never stepped up and now Keon Hatcher, who plays both the Y and the Z at times, appears be the next best option. The success of the Razorback passing game in the future will directly correlate to the kind of performances that Hatcher, Horton, Cowan, and the tight ends have.

So what should the Hogs do? Nothing right now, other than hope that Demetrius Wilson returns from his ACL injury better than ever next year. Wilson (6’3, 180) is a better X as he can use his height as a mismatch against smaller corners. Unfortunately, Wilson and Herndon won’t get a year together as the X/Z guys, so the Hogs will still need Hatcher to become a threat at the Z, assuming that’s where he ends up.

The other thing the Hogs are doing is using tight ends, usually Jeremy Sprinkle, as X receivers in certain packages. Sprinkle is 6-foot-6 and provides a mismatch for the defense when he lines up as a split receiver, often allowing Herndon to slide into the Z spot and get softer coverage. Some of these options will be covered in the South Carolina preview.

Ultimately, the Hogs will need to either recruit taller receivers, or develop a stronger passing game with the tight ends. If the tight ends can stretch the field both vertically and horizontally, the Hogs can bypass the need for a dominant possession receiver. Hunter Henry appears poised to do so, so the Hogs need another passing threat that can create a mismatch.

Right now, as Florida showed, the Razorbacks receiving corps is ill-prepared to tackle the challenge of SEC defenses.

So how bad is the defense? The Hogs haven’t finished in the top half of the conference in total defense since 2006. The Hogs were 13th in the SEC last year (that’s next-to-last). Having played the conference’s #1 offense, how bad’s the damage now?

Wow. The Hogs aren’t just third, but third by a comfortable margin. There are certainly a number of factors that have gone into that ranking, time of possession being one of them (Arkansas’ opponents average fewer drives per game than most teams). And it doesn’t provide much solace for the Hog defense, which has and certainly will continue to struggle against good passing teams (and even bad passing teams, as Florida showed). But it does give one conclusion: other defenses around the SEC are pretty dang bad. The Hogs’ next opponent, South Carolina, doesn’t turn up in the top 5. Other defensive stats are promising: 5th in run defense, 6th in pass defense, 5th in scoring defense, 2nd in sacks, 6th in third-down defense. All of those figures are in the top half of the conference.

Here’s another stat that really stands out. Among Arkansas’ 9 BCS-level opponents, where does each rank in terms of rushing defense? For the three games already played, here are the rushing yards, total yards, and points scored in those games.

The Razorbacks’ hardest challenges in terms of run defense are behind them. After the Alabama game comes a bye week, and then the season closes with four consecutive games against opponents lacking top-40 run defenses. Somehow, the Hogs faced two of the top three rushing defenses in the nation on the road and are still averaging 216 rushing yards per game, fourth in the SEC.

Brandon Allen did not play against Rutgers.

Most of the remaining defenses on the Hogs’ schedule will have defenses closer to A&M than to Florida when it comes to stopping the pass. Let’s focus on two winnable games in the future: South Carolina and Auburn.

The Gamecocks run defense is a considerable step down from that of Rutgers and Florida (2nd/3rd to 34th). When the Hogs need to throw, the Gamecocks are almost as bad as Texas A&M (95th to 72nd). Auburn is worse than South Carolina at stopping both the run (68th) and the pass (106th). The Tigers are the worst pass defense left on the Hogs’ schedule, surrendering 286 passing yards per game despite not exactly facing juggernaut passing attacks (Washington State, Arkansas State, Mississippi State, LSU, and Ole Miss).

With those numbers, there’s plenty of room for optimism about the Razorback offense against future opponents.