Arkansas not changing things for Alabama 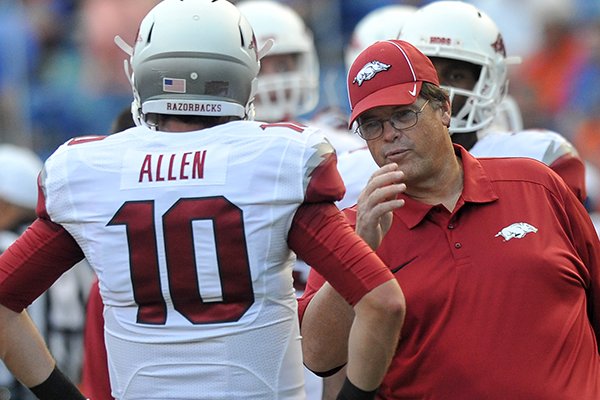 FAYETTEVILLE — Coming off one of the worst offensive performances in school history and on the heels of four straight losses, it would be easy for Arkansas to make wholesale changes going into this week's matchup with No. 1 Alabama.

But the Razorbacks' coaches have faith in what they have taught to this point and say they won't be making any drastic changes any time soon, not even for the two-time defending national champion.

"I think it would have been easy to do that 15 years ago, but I've probably done that four or five times and it didn't work," Arkansas offensive coordinator Jim Chaney said. "You go back to work like everybody does when things don't go your way. You wake up the next day and go to work and look forward to the next ball game so you can right some wrongs and give yourself a chance to be successful.

"We are committed to what we are doing long-term."

What Arkansas is doing hasn't yielded the results the Razorbacks hoped to see. Arkansas has been held below 300 yards of total offense in three of their last four games.

The Razorbacks amassed only 248 yards of total offense in a 45-point loss to South Carolina last Saturday, running only 30 plays after scoring on the opening possession. Arkansas had the ball only 16 minutes, 35 seconds.

Particularly frustrating on the offensive side of the ball was Arkansas' passing game. Quarterback Brandon Allen attempted only 12 passes, completing four for 30 yards and failing to throw a touchdown for the second consecutive game.

The Razorbacks' run game has continued to be successful, with Alex Collins and Jonathan Williams able to move the ball even during the losing streak. Add in a pair of end-around runs by Keon Hatcher and Arkansas rushed for 218 yards against the Gamecocks, but couldn't sustain momentum from their biggest gains when Hatcher and Collins fumbled after runs of 50 and 29 yards deep into South Carolina territory.

"It's really hard to pinpoint one certain thing," Allen said. "Offensively, we had a lot of miscues and a few big runs turn into fumbles at the end, the interception. There were just a few things that really hurt the offense and gives you no momentum.

"It's not something we're proud of. I think that's probably the fewest number of plays we've ever ran here. Winning first down is a big thing for us. You can't be backed up on first down and expect to move the ball and get first downs."

Allen, a redshirt sophomore, continued to struggle with turnovers against the Gamecocks, throwing a first quarter interception that was returned to the Arkansas 6. It was the third consecutive game Allen had been intercepted at least once. Both Texas A&M and Florida returned interceptions for touchdowns against the Razorbacks.

Since halftime of the Texas A&M game on Sept. 28, Allen has thrown four interceptions to only one touchdown. Arkansas coaches maintain Allen is their quarterback this season despite the struggles.

"Coach Chaney talked to me for a while and we talked about getting on the same page and where we want to take this team," Allen said. "That was real helpful for me and real encouraging.

"A lot of my family and friends have told me that game is over. It's done and everyone has a bad game once in a while, and it's time to move on."

Moving on won't be easy against a Crimson Tide defense that has allowed only one touchdown in its last four games. Alabama ranks in the top 10 nationally in five defensive categories.

"We really wouldn't have it any other way," Allen said. "We're trying to get a lot of respect back, and what better way to do that than against the number one team in the nation?"