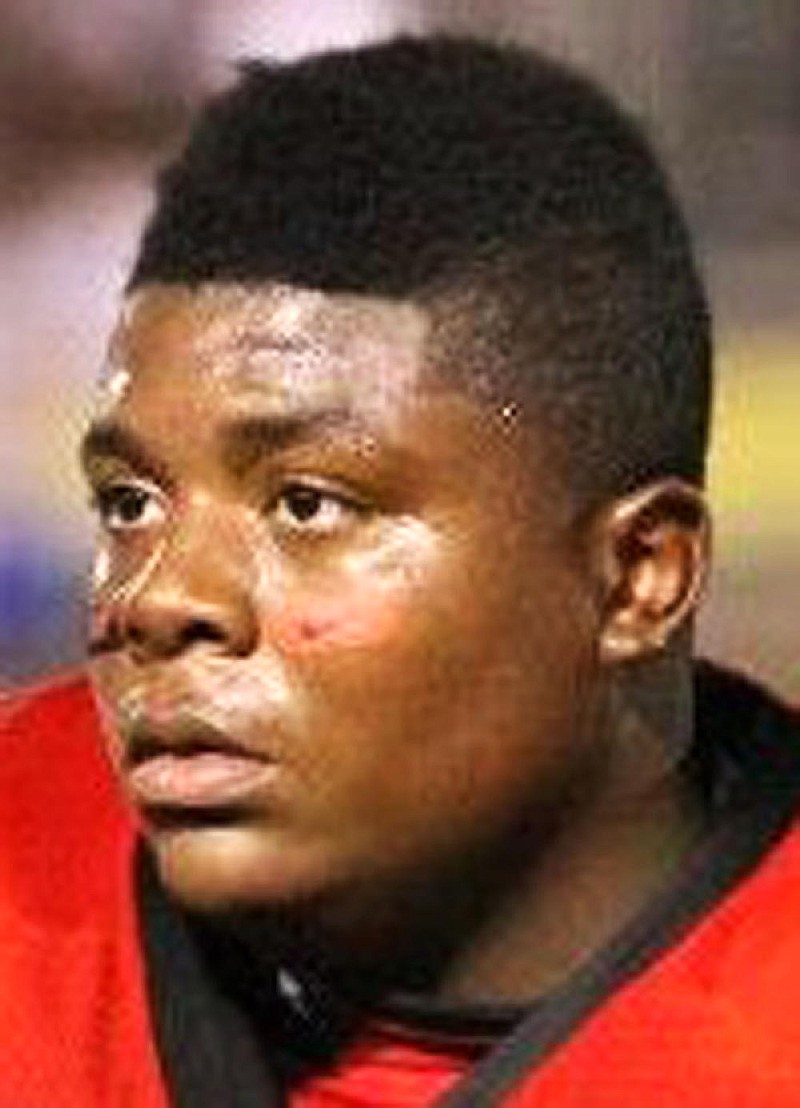 Defensive lineman Craig Evans of Sun Prairie, Wis. is a prospect the Hogs hope to land in the 2014 class.

Defensive tackle Craig Evans called his official visit to Arkansas over the weekend “remarkable” and believes he would see personal growth if he signs with the Razorbacks.

“It’s been nothing less that what I expected,” said Evans, who’s committed to Wisconsin. “I’ve not been disappointed. I really see Fayetteville being a place where I can be and a place I can grow up as a young man and into a man. It’s just a beautiful place. Arkansas is a live university. I mean when it’s game day it’s live. The fans are alive, everybody is awake, the town is awake and it’s just insane.”

Evans, 6-3, 300, 5.0 seconds in the 40 yard dash, of Sun Prairie, Wisconsin is rated the No. 56 prospect in the nation by Tom Lemming of CBS Sports Network. The Hog fans impressed with their knowledge of his background.

“As soon as I came in they knew my name Craig Evans,” he said. “They knew I was a D-lineman. It was just crazy. I’m at the top of the map and they’re down here. It’s just love man. I just felt so much love and that’s all I am. I just want to feel love man and when I came here I most definitely got that love. That’s a plus.”

He first met Bielema and Partridge as a freshman and the relationship eventually lead him to commit to the Badgers in 2012 but he reopened his recruiting when Bielema left for Arkansas.

“Coach B knows what’s up me and him had a little talk last night,” said Evans of eating dinner at Bielema’s home Saturday evening. “Coach P knows what’s up. Coach P knows what I’m feeling. Those guys trust me that I’m going to make the right decision like they did when I was at Wisconsin. So they know what’s up and I’m pretty sure they trust me.”

Friday’s trip to the Catfish Hole for dinner was one of the highlights of the visit.

Some of the Hog defensive linemen and his host were vague about what he should expect while at the Catfish Hole.

“I kind of knew it was something, but I didn't know it was that,” Evans said. “I went in there and it was just crazy. I want to say more than 75 percent of the people in there knew my name. That felt so good because I'm at the top of the map, they're down here and they already know me. That's just love.”

Arkansas’ defense held Southern Miss under 300 yards and without a touchdown in the Hogs’ 24-3 victory.

“I know Coach (Chris) Ash and I know Coach P,” Evans said. “Those guys love to win. They love to stop the run and that defense was none short of perfect. The D-line played exceptionally well.”

“I just wanted to visit Arkansas and I'm going down to Wisconsin,” Evans said. “That's just really it. Those are my two.”

Final decision shouldn’t be too far off.

“It’s coming up pretty soon,” Evans said. “I kind of want to get this out of the way and focus on my school year and focus on the books. So I want to say anywhere between the next month I should have my decision finalized.”