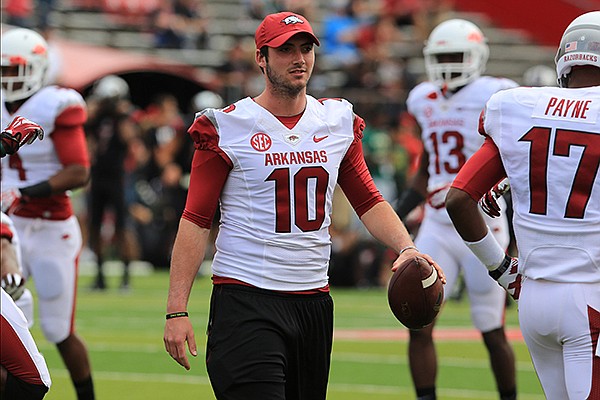 FAYETTEVILLE — The status of Arkansas quarterback Brandon Allen is still questionable heading into the Razorbacks' preparations for their Southeastern Conference opener against Texas A&M.

Allen, who suffered a bruised shoulder in Arkansas' game against Southern Miss last weekend, did not play in a 28-24 loss at Rutgers on Saturday. He had been limited in practice prior to the game, taking snaps for the first time Thursday and struggling to pass the ball.

The Razorbacks started junior college transfer AJ Derby in place of Allen against the Scarlet Knights. Derby completed 14 of 26 passes for 137 yards and a touchdown, but led the team to a season-low 283 yards of total offense.

"If he can go, he can go," Arkansas coach Bret Bielema said of the redshirt sophomore quarterback Allen. "If not, we'll continue with AJ's progress and development and see what he can do."

Allen has completed 26 of 44 passes for 388 yards this season, throwing for 5 touchdowns and an interception. Derby wasn't asked to pass much in his first appearance of the season against Southern Miss, completing 4 of 6 passes for 36 yards in three-plus quarters of play.

Arkansas did not play freshman Austin Allen at Rutgers. Coaches are hopeful they can redshirt the true freshman, who was a record-setting passer at Fayetteville High School.