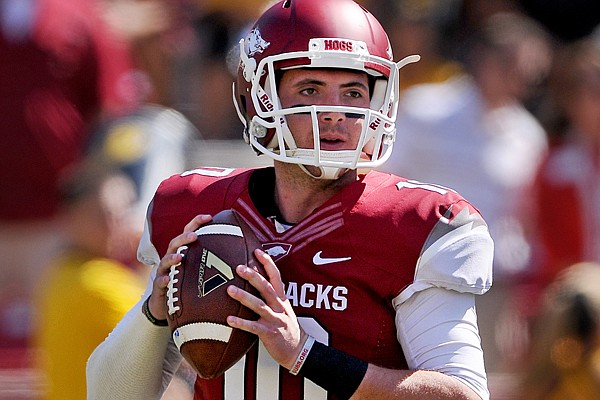 Arkansas quarterback Brandon Allen looks for a receiver during the first quarter of the game against Southern Miss on Saturday September 14, 2013 at Razorback Stadium in Fayetteville.

Allen, who suffered a shoulder injury Sept. 14 against Southern Miss, hasn't thrown in practice the last two weeks, and instead has been limited to taking snaps and working on handoffs. Arkansas coach Bret Bielema said Allen has worked with an air ball - lighter than a regulation football - to regain his throwing motion during practice this week.

AJ Derby would make his second career start Saturday against the Aggies if Allen can't play. Bielema said he expects Allen to return for the Razorbacks' game at Florida next week.

"To expect him to be back in two weeks was unrealistic," said Bielema, who later added he is still optimistic Allen will play against Texas A&M and would start him if he progresses. "AJ, this would be his second collegiate start and he had a lot better week of preparation."

Derby completed 14 of 26 passes for 137 yards and a touchdown in last week's 28-24 loss at Rutgers. He completed 4 of 6 passes for 36 yards in three-plus quarters of play against Southern Miss.

Allen completed 26 of 44 passes for 388 yards and 5 touchdowns prior to his injury. He was also intercepted once.

"I told him going into game one, 'If we need you, we will play you,'" Bielema said.

It would be the second time in as many seasons Arkansas will be without its starting quarterback when a top 10 team comes to Razorback Stadium. Brandon Allen started in place of Tyler Wilson last year against No. 1 Alabama after Wilson suffered a concussion the week before.