Hogs in midst of important stretch 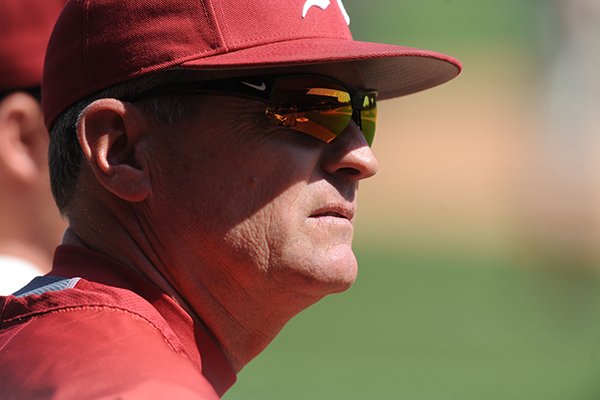 FAYETTEVILLE — Two wins over South Carolina were only the start of a stretch that could make or break Arkansas' postseason resume.

The three-game series against the Gamecocks began a stretch of 10 games in two weeks against ranked opponents for the Razorbacks. Arkansas will host No. 20 UNLV in the midweek, travel to No. 16 LSU this weekend and host No. 11 Vanderbilt next weekend.

The Razorbacks entered last week ranked No. 116 in the NCAA's ratings performance index (RPI), but will undoubtedly move up following back-to-back wins over the previously No. 1 Gamecocks in the poll. Series wins at any point before Easter would boost the Hogs' rating even more.

"Mentally we know we can play with anybody when we're playing well," Arkansas coach Dave Van Horn said. "We've got great pitching. It's all about timely hitting and execution for us. We don't have anybody who's going to light it up all the time, but we can hang with you with our pitchers, and if we can make plays behind them we've got a chance to be in every game."

Arkansas held South Carolina to just three runs in the series, shutting out the Gamecocks in the finale. It continued a stretch of good play against one of college baseball's premier programs, with the Razorbacks winning their second straight series against South Carolina.

Arkansas has won seven games over South Carolina since 2012, which is the most for any program against the Gamecocks during that time.

"We try to take every series the same way, but maybe we don't; maybe we come out a little more on fire because they're always up there," said senior catcher Jake Wise. "I've been here four years and they've been in the top 10 every year I can remember. Maybe we just need to take that same mentality to every weekend."

Arkansas is 20-12 overall this season and 6-6 in SEC games. Despite their .500 record in conference play, the Razorbacks are only two games back of first place in the Southeastern Conference, adding even more value to the games the next two weeks.

"It's a stretch where the guys that are in that locker room, I'm hoping that's why they came to the University of Arkansas, to play that type of schedule," Van Horn said. "I told them, 'It's a tough league and you've got to be tough-minded if you're going to have success in this league. You can't get all excited and giddy about winning one series because you've got another series coming up.' I think they understand that."