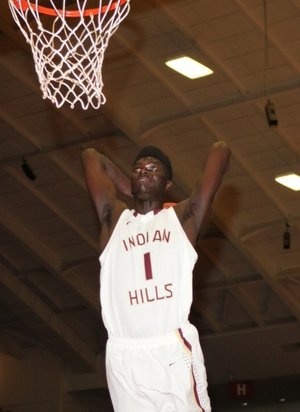 Malik Dime skies towards the basket.

Junior college forward Malik Dime, who plans to officially visit Arkansas, is just as impressive off the court as he is on.

He moved to the United States from Senegal, a nation of about 13.1 million in western Africa, three years ago with his mother. He played soccer, volleyball, handball and tennis but didn't play basketball until arriving in the states.

He's been communicating with Coach Mike Anderson, associate head coach Melvin Watkins and assistant Matt Zimmerman. He said the Hogs are recruiting him hard and he talked to the coaches almost everyday.

Dime wants to play in an uptempo program and that's a key reason for his interest in the Razorbacks.

He is fluent in seven languages, English, French, Spanish, Arabic, Pulaar, Joola and Wolof, the official language of Senegal.