Former players reflect on one of Arkansas' greatest victories 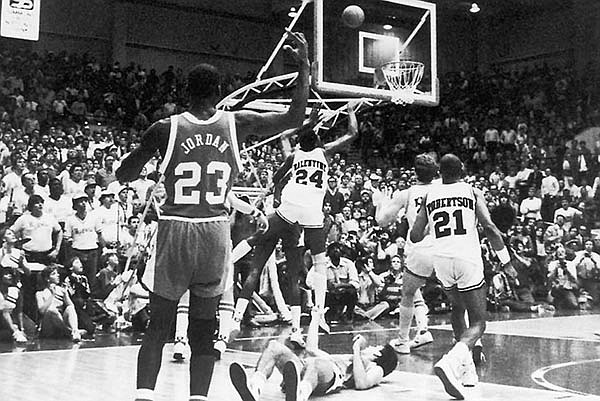 Balentine's grandfather, C.J., was born with the last name Valentine, but when he joined the military in World War II a typist inadvertently typed a B instead of a V on the keyboard when entering his paperwork. By the time Charles' father was born, a new family name had been, too.

"He couldn't change it," Balentine said. "I had aunts and uncles named Valentine."

As fate would have it, Charles Balentine would benefit from the family's name change. Valentine's Day was taken but Balentine's Day was for the taking when the Newport native hit a baseline jumper with 4 seconds remaining to stun previously undefeated North Carolina 65-64 in Pine Bluff on Feb. 12, 1984.

Balentine's Day quickly caught on to commemorate the Razorbacks' first ever win over a No. 1 team. The Tar Heels, 19-0 at the time, were no ordinary team when they entered the Pine Bluff Convention Center, with a roster including five future NBA first-round draft picks - including Michael Jordan - and two future college head coaches. 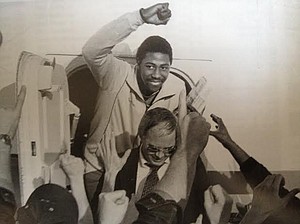 "It was an NBA team," Balentine said. "They were very talented."

Arkansas had a pair of future NBA first rounders as well in Joe Kleine and Alvin Robertson, and Hall of Fame coaches Dean Smith and Eddie Sutton were pacing the sidelines.

"When you look back on it, it's wild to see how much talent was out there," Kleine said. "It was one of the greatest games I've been a part of in my life, not just at Arkansas. As it's gone on because of the success of Michael Jordan, I can say I beat Michael Jordan's undefeated college team and that resonates a little more."

Balentine said Smith requested the game wasn't played in either Barnhill Arena in Fayetteville or Barton Coliseum in Little Rock. He chose the Pine Bluff Convention Center because of its size, Balentine said, presuming it was the easiest of the three arenas in the state at that time.

"It was a small venue and held less than 8,000 people," Balentine said. "It seemed like every time we went to that place it was hot and the crowd was always loud. We knew we were always appreciated and people always showed up."

Arkansas flew into Pine Bluff the day of the game after beating SMU the night before in Dallas. The team was supposed to leave Dallas the night of the SMU game, but severe storms kept them grounded.

"I just remember how little we prepared for North Carolina because that was the third game in five days," Kleine said. "That was the least important game. We were more worried about keeping up with Houston and Phi Slamma Jamma."

Though Arkansas was unranked the game was picked up by NBC with iconic broadcasters Dick Enberg and Al McGuire on the call. Arkansas led 38-34 at halftime and the Razorbacks were up by as many as 10 points in the second half.

Led by Jordan, North Carolina fought back. Jordan scored 21 points, pulling the Tar Heels within 63-62 on a 16-foot jumper with 1:50 remaining and giving his team the lead with a contested fall-away jumper with 1:13 remaining.

With no shot clock Arkansas was able to hold for an attempt in the waning seconds. Robertson drove into the lane and found Balentine, who shook away from his defender - future North Carolina head coach Matt Doherty - down the baseline and put up a floater over Sam Perkins.

"The play before that shot I hurt my knee and I remember being in a lot of pain," Balentine said. "At the end I'm jumping up and down like nothing was wrong because my adrenaline was pumping."

Balentine's jumper was one in a series of events to help propel the Razorbacks' basketball program onto the national scene in the late 1970s and early 1980s. The famed Triplets led Arkansas to the Final Four in 1978 and U.S. Reed's halfcourt shot at the buzzer downed defending national champion Louisville in the second round of the NCAA Tournament in 1981.

"Everybody kind of piggybacked off what was done before them," Kleine said. "I think those first years with Coach Sutton were years of laying a foundation and then showing the foundation could be maintained."

The win over North Carolina vaulted Arkansas to No. 14 the next week. It was part of a seven-game win streak for the Razorbacks, who won nine of their last 10 regular season games. The only loss came at Houston, but Arkansas got revenge with a win over the No. 2 Cougars eight days later at Barnhill.

The Razorbacks' season ended abruptly with an overtime loss to Virginia in the first round of the NCAA Tournament. Arkansas finished 25-7, but the North Carolina win makes it a year fans still talk about.

"You can almost picture it being like the other day," Balentine said. "It has lived on for a while." 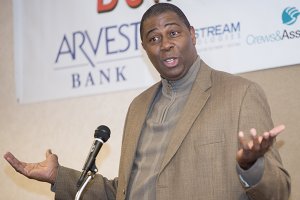 Photo by Karen E. Segrave
Charles Balentine speaks to the Downtown Tipoff Club at the Wyndam in North Little Rock on Feb. 19, 2013.

Ironically, after his playing days Balentine was relocated to North Carolina for a short time during his 21-year career at Walmart. It took a while before his name registered with longtime Tar Heels fans, he said, but his name still turns heads in his home state.

"I hear a lot about where fans were," said Balentine, who now works in Rogers. "When someone hears my name, they can tell you where they were at, what was going on and what they were doing.

"When I'm out in public at a sporting venue a lot of people will say, 'There's Charles Balentine. He made the shot against North Carolina playing for the University of Arkansas.' It's when those kids turn around and look like, 'There's a Razorback player,' that's what makes me so proud. I always thank the fans for it, for the support."