Gragg has plan for choosing a school 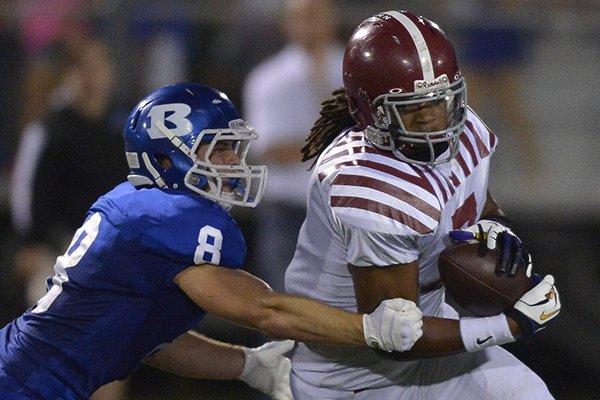 Pine Bluff tight end Will Gragg has 12 scholarship offers and is adding others almost on a daily basis. He has a plan to find the right school.

“You just have to go where you feel the most comfortable and a place of God tells you can succeed at and a place you can see yourself succeed,” Gragg said. “I’m going to take that into account. Not only football, but life outside of football. Like if Arkansas had a coaching change would you still want to go to that school because you got to prepare for life outside of football."

"If you do make it to the NFL, the average career is two to three years. You have 40 to 50 years after that that you have to look at.”

Gragg, 6-4, 238 pounds, 4.8 seconds in the 40-yard dash, named a top five in no particular order of Arkansas, Alabama, Ole Miss, LSU and Louisville on Feb. 3. Because he’s added offers from Oklahoma, Oklahoma State, Auburn, Texas and Florida State, he plans to announce another top five in the summer. Video highlights CLICK HERE

“I’m going to try to get all the schools that are in close proximity to Arkansas during the summer,” Gragg said. “Hopefully after the summer, I’ll have a good idea where my head is at and the five schools I want to take officials to.”

Gragg plans to visit LSU this weekend and Arkansas on March 1.

He originally planned to announce his college decision on his birthday on Sept. 23, but has pushed it back to Nov. 18. He’ll lean on his parents, Kelvin and Tenita while figuring out his five official visits.

“I’m going to go places I normally wouldn’t be able to go to a regular basis and schools that I have a genuine feel for,” said Gragg, who recorded 36 receptions for 367 yards and 6 touchdowns last season. “There’s no point in taking an official visit to the school that you know you’re not going to go to.”

The 2015 in-state class is one of the strongest collection of athletes in several years and could possibly see the Hogs extend up to 14 scholarship offers. Being able to join the class at Arkansas is enticing.

“It’s always in the back of my mind in trying to get them back to where they were in 2010 and 2011,” said Gragg, who has committed to play in the Under Armour All American game. “The state rose up everybody was behind them just just the feeling it putting on for your own your home state That really makes a big difference.”

His brother, Chris, who played tight end at Arkansas before being taken by the Buffalo Bills in last year’s NFL Draft, is staying neutral.

“He just tells me to take it in stride and go where I feel comfortable,” Gragg said. “He’s not pushing me to Arkansas or anywhere. He’s letting me have my time and guide me along the way tell me the dues and don’ts and handling the process correctly.”