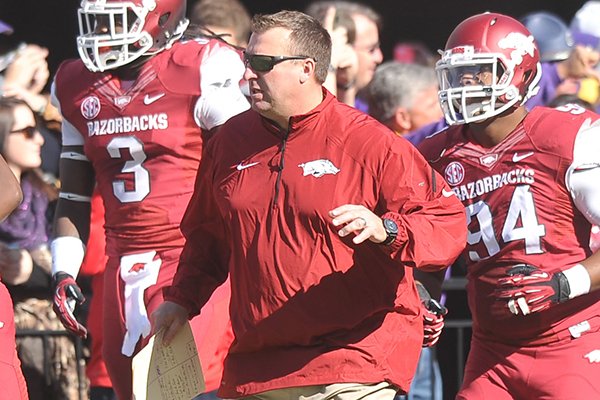 Arkansas coach Bret Bielema before the start of a game at Tiger Stadium in Baton Rouge, La. on Nov. 29, 2013.

Bielema said at least 15 candidates have interviewed for the open position, including "a few" on campus in Fayetteville. Bielema said the hire will be made prior to the next live recruiting period that begins next Thursday.

"It is going to be someone who helps us win ball games."

Bielema said the applicants for the job include college and NFL coaches, and he had to wait until bowl games and the NFL regular season ended to conduct all interviews.

Partridge, who spent five seasons with Bielema at Wisconsin prior to his only season at Arkansas, also had an associate head coach title. Bielema said he is unsure whether the new hire will assume that role or a current assistant coach will be promoted to the role.

Bielema said no other programs have reached out to speak to other Arkansas assistant coaches. Defensive coordinator Chris Ash and linebackers coach Randy Shannon were recently linked to other jobs in published reports.

"The distance between truth and reality can be pretty wide in coaching," Bielema said.