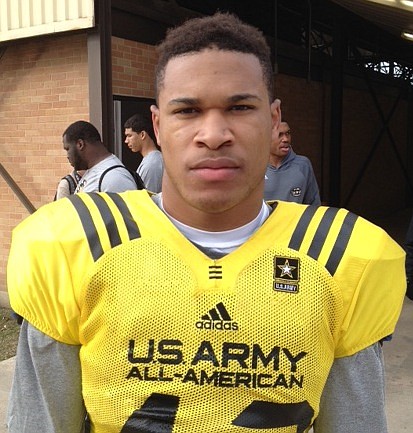 Young, 6-2, 220, 4.6 seconds in the 40 yard dash, of River Ridge, (La.) John Curtis said receivers coach Michael Smith and linebackers coach Randy Shannon are recruiting him hard while the Razorback fans are encouraging him to be a Hog on Twitter. Video highlights CLICK HERE

He said Shannon picked up the intensity after his season.

“I understand why coach Shannon recruits like that, he doesn’t want kids to lose focus,” Young said.

Young’s cousin LaRon Byrd played for Shannon at Miami and has told him good things about the Razorback coach.

“He got me excited about coach Shannon,” Young said.

He plans to officially visit Arkansas on Jan. 17 and Texas A&M on the 19th and will also take trips to UCLA and Oklahoma State.

Young, who was a second team All American by USA Today, recorded 122 tackles, 14 tackles for loss, 4 sacks, an interception, pass deflection, recovered fumble and a blocked field goal for the Patriots.

He’s considering several majors, including an eye on possibly piloting a ship.

“That’s why Texas A&M is one of my top schools because they have this program called river pilot,” Young said. “Not really sure what the major name is.”

“I think driving a boat would be pretty cool and all the other stuff that goes with it. It doesn’t have to be in Louisiana and the Mississippi River. It can be anywhere. I’m blessed with scholarships and the opportunity to go top school for four years and that’s what I want to do.”

Young is looking for something that separates a school from others.

“Something that stands out from my top schools,” he said. “Something different that I haven’t gone through in my recruiting process.”