Thursday recruiting tidbits from The Opening 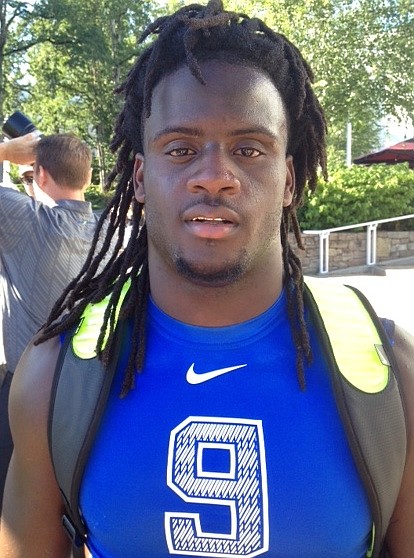 He said the likelihood of an unofficial visit is four out of ten. The odds of an official visit appears to be greater because the school can pay for the trip.

Cornerback Kendall Sheffield of Missouri City, (Texas) Marshall said he talks to defensive backs coach Clay Jennings every two weeks. He likes that Jennings has produced several defensive backs who have gone on to the NFL. He said he wants to visit, but wants to get with his father to discuss things. Video highlights CLICK HERE

Safety Will Sunderland of Midwest City, Oklahoma said he's looking to visit Arkansas in about two weeks. He also plans to make an official visit to Fayetteville. His number one priority in choosing a school is playing time. He thinks very highly of his lead recruiter and offensive line coach Sam Pittman and Coach Bret Bielema. Video highlights CLICK HERE

Cornerback P.J. Mbanasor of Pflugerville, Texas said defensive backs coach Clay Jennings has been very respectful about his June commitment to Oklahoma. He said Jennings isn't recruiting him. Should he change his mind, I'm sure Jennings will go full speed ahead. Video highlights CLICK HERE

Receiver Lawrence Cager III, 6-5, 200, 4.62 of Baltimore, Maryland said he and other prospects are planning to visit several SEC schools, including Alabama, Tennessee Kentucky and possibly Arkansas.

He reports more than 30 offers. He started off as a kicker as a sophomore because of his soccer background, but was told by his coach he could play in the NFL as a big receiver. He switched to receiver and the rest is history. Video highlights CLICK HERE