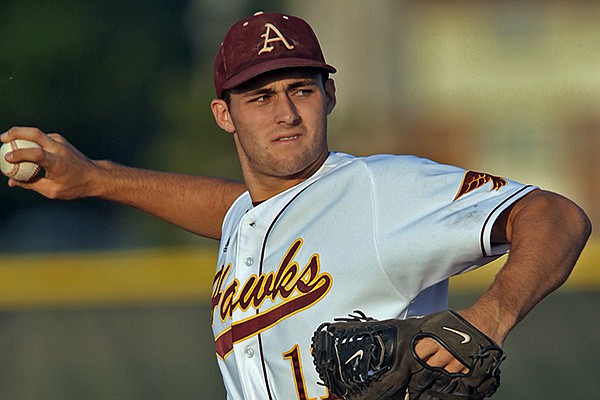 FAYETTEVILLE — For a program prone to draft disappointments, the last two days have been a welcomed change for Arkansas.

Despite having four signees ranked among Baseball America's top 213 draft-eligible players, the Razorbacks had only one selected in the first 10 rounds of the MLB Draft. Left-handed pitcher Sam Hentges was taken in the fourth round by the Cleveland Indians, but right-hander Keaton McKinney, outfielder Luke Bonfield and catcher Nathan Rodriguez went undrafted through the high-money rounds, increasing the chances they will be at Arkansas in 2015.

McKinney, a native of Ankeny, Iowa, has been considered the prize recruit in the Razorbacks' latest signing class, which was ranked as the ninth-best nationally by Perfect Game USA. McKinney (6-foot-5, 230 pounds) was named his state's Gatorade Player of the Year as a senior.

"If we could keep him, that would be huge," Arkansas coach Dave Van Horn said earlier this week. "He's a 92, 93 mile an hour kid out of high school with a big-time changeup. What keeps him from going higher is he has just an OK breaking ball. He wants a lot of money…but if he doesn't go in the top two rounds, there's a chance we could get him."

In an interview with The Des Moines Register newspaper Friday, McKinney indicated his asking price of more than $1 million was too high and he will enroll at Arkansas this summer.

"I'm not really worried about not signing," McKinney told the newspaper. "I can't wait to get (to Arkansas) and make a run for the College World Series.

"I believe that I will be a first-rounder in three years out of Arkansas."

Rodriguez and Bonfield were ranked 86th and 91st, respectively, on Baseball America's list of best high school draft prospects. Both are considered good hitters. Rodriguez batted .388 with 10 RBIs as a senior at El Dorado High School in Yorba Linda, Calif., while Bonfield batted .379 with 30 runs scored and 19 RBIs at IMG Academy in Bradenton, Fla.

Van Horn said earlier this week he felt confident Rodriguez wanted to come to school, but was unsure of Bonfield's plans.

"Our conversation with him is, 'If you want to sign, you’ll get to sign. It’s going to be up to you. You’ll get the money that you want,'" Van Horn said. "I don’t know what he wants exactly. Sometimes there’s a gray area there. Do you want to come to school or not? Do I think we’re going to get him? It's 50-50, maybe.”

Van Horn indicated Bonfield would likely require top 10 round money to skip college. The money a major league franchise can offer one of its draftees falls off sharply after the first 10 rounds.

It isn't uncommon for a highly-rated player to go undrafted when teams don't feel they will be able to come to terms with him.

Hentges will obviously be the signee to keep the closest eye on between now and the mid-July signing deadline for drafted players. The 6-foot-6, 235-pound Minnesota lefty has the look of a professional already.

"He's a guy that we desperately want," Van Horn said. "If he goes in the first three rounds, he'll sign. If he doesn't, I think we've got a good shot at keeping him.

"If we keep one of (Hentges or McKinney), it will be big."

The draft hasn't been particularly kind to the Razorbacks' signing classes in recent years. Arkansas lost four signees to professional contracts in 2010 and 2011, three in 2012 and two last year.

If Arkansas can get the majority of its signees on campus next season, expectations could be high. Several freshmen played key roles in the final month of the 2014 regular season for the Razorbacks, while the team will also return its Friday night starting pitcher Trey Killian and a pair of multi-year starting outfielders, Joe Serrano and Tyler Spoon.

Rounds 11 through 40 of the MLB Draft will take place Saturday.