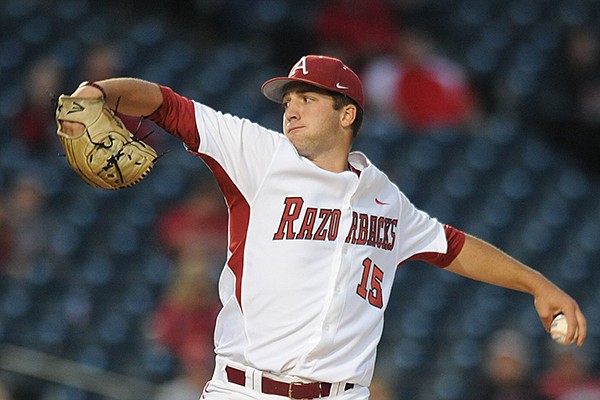 Arkansas starter Colin Poche delivers a pitch during the fourth inning against Nebraska Tuesday, April 1, 2014, at Baum Stadium in Fayetteville.

Razorbacks coach Dave Van Horn said Poche will stay in his hometown of Flower Mound, Texas, to rehab from the surgery. Poche won't be able to pitch in 2015 because of the recovery time, which is typically 12 to 18 months for pitchers.

"He's going to take some classes there and he might even end up at another school," Van Horn said. "That's still all up in the air."

The left-hander would be a redshirt junior if he returned to college for the 2016 season. A former fifth round selection of the Orioles, Poche will also be draft-eligible next June.

After recording a 1.37 earned run average in eight outings as a freshman, Poche was less effective as a sophomore. He finished last season with a 3.00 ERA in 18 outings, eight of which were starts.

Poche struggled during the conference season, particularly during his final three outings when he allowed seven runs over 4 1/3 innings at Missouri and against LSU twice at the SEC Tournament. In retrospect, Van Horn said the elbow injury helped explain the late-season trouble.

"It was kind of interesting because he didn't say his arm was bothering him until his last outing," Van Horn said. "That's why he didn't pitch in the regionals. I don't know when he hurt it. It might have started during the year or it might have been that way for a while."

With Poche out, Arkansas will lack experience from the left side of the mound next season. The team's top lefties, Jalen Beeks and Michael Gunn, were drafted by the Red Sox earlier this month. Beeks has signed a professional contract and Gunn is expected to do the same prior to the July 18 deadline.

The Razorbacks also lost left-handed signee Sam Hentges to the draft. Hentges received a $700,000 bonus after being drafted by the Indians in the fourth round.

Benintendi was slated to play for San Luis Obispo in the California summer league, but is out for at least another month because of the injury. Benintendi is staying in his hometown of Cincinnati and working out at the facility for the Midland Redskins.

Benintendi is one of three players who started at least 26 games for the Razorbacks recovering from injuries this summer. Outfielder Tyler Spoon (wrist, shoulder) and catcher Blake Baxendale (hamstring) are also sitting out summer baseball.