Hogs getting talented QB in Allison 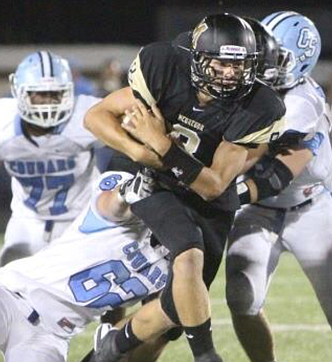 Quarterback Troy Allison will report to Fayetteville on June 30.

On Wednesday, quarterback Troy Allison of McGregor, Texas announced his intentions to be a preferred walk-on at Arkansas and will report to Fayetteville on June 30.

“He’s a real poised young man in the pocket and has a cannon for an arm,” Seward said. “He can throw any route at anytime.”

He’s a five sport athlete who also competed in basketball, baseball, track and field along with golf.

“He’s played all these sports at McGregor and now he’s going to be able to concentre on one thing,” Seward said.

Allison excelled in field events and had a 6-8 high jump, 45 feet in the triple jump and 23 feet in the long jump.

“His brother is a high jumper on the Division I level,” Seward said. “His dad was a 7 foot high jumper and his mother was a college basketball player.”

Seward said Allison’s work ethic will be evident when he reports to Arkansas.

“He’ll be there everyday,” Seward said. “I don’t think he’s missed a workout in four years.”

Allison had several D-I schools interested, but was hurt by a late test score.

“Boise State and North Texas and a couple of others showed a lot of interest in him,” Seward said. “His biggest deal was he was a late qualifier. Both times he was going to take the ACT test or SAT, we had just come home from one of our biggest games of the year and got home at one or two o’clock in the morning and he had to get up and take the test the next day.”

“His dad is about 6-4 and his brother is 6-4 and both grew two inches after high school,” Seward said. “I look for Troy to probably do the same thing.”

The Hogs made Allison feel at home during last week’s visit.

“They made him feel like a 5-star recruit when he visited,” Seward said. “I think that’s the big reason why he’s there because they want him and he knows that.”

“He’s told us along that he feels like he’s a big-time college quarterback,” Seward said.