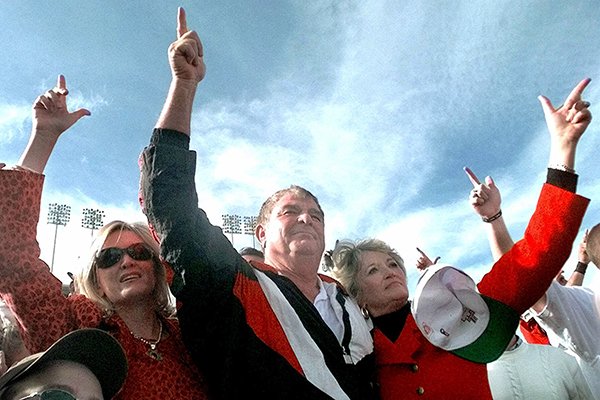 The game — which Arkansas won 27-8 — didn’t count in the Southwest Conference standings because Texas Tech was in the final year of a three-year probationary period and didn’t become a full-fledged member until 1960 after leaving the Border Conference.

“Arkansas had Wayne Harris and Texas Tech had E.J. Holub,” said Hatfield, a high school junior at the time. “Two of the best linebackers to ever play the game, and they were on the same field. That was a great moment to see those two that day in Little Rock.”

Hatfield, who later faced the Red Raiders nine times as a player and head coach for the Razorbacks, will again be a fan attending the latest Arkansas-Texas Tech game when the teams renew their rivalry today at Jones AT&T Stadium.

It will be their first meeting since 1991. The next season Arkansas left the SWC for the SEC. Texas Tech joined the Big 12 Conference in 1996 after the SWC dissolved.

Today is the first game of a home-and-home series, with Texas Tech playing at Arkansas next season.

Hatfield and his wife, Cyndy, drove to Lubbock earlier this week so they could be on hand for the first Arkansas-Texas Tech game in 23 years.

“I get excited any time we get to play an old Southwest Conference opponent, just from the standpoint of the history and the tradition,” Hatfield said. “I’ve always had a great respect for Tech, so I’m glad we’re playing the game again.

Hatfield played the Red Raiders twice at Lubbock as a defensive back and punt returner in 1962 and 1964 and coached there with the Razorbacks three times in 1985, 1987 and 1989. Arkansas won all five games.

“They had a horse that ran up and down the field,” Hatfield said, referring to Texas Tech’s mascot. “You just hoped you didn’t get run over.”

Hatfield won’t be the only former head coach involved in the series in attendance. Spike Dykes, who coached Texas Tech from 1987-1999 after being defensive coordinator from 1984-1986, also will be at today’s game.

“I think it’s great Texas Tech and Arkansas are playing again,” Dykes said. “It’s one of those rivalries that you really hated to see end.

“It was disheartening to see Arkansas go the other direction, because it was such a great experience for our players to come to Fayetteville or Little Rock to play, and our fans always were excited when Arkansas came to Lubbock. Our loss was the Southeastern Conference’s gain, I guess you might say.”

“Lubbock is kind of a different place because you’re way out there in West Texas,” Bequette said. “It’s just a city out in the middle of nowhere.

“I still remember that when we were flying home and our charter was going down the runway, there were these huge jackrabbits darting in and out of the plane’s lights.”

Bequette said Texas Tech is a tough environment for a visiting team.

“Their fans are really loud because in that stadium they’re right on top of you,” he said. “We had a hard time hearing in the huddle.”

There weren’t many Arkansas fans to make noise when the Razorbacks played at Texas Tech.

“It’s so far to Lubbock, we didn’t get a lot of fans like we did at most of the other Southwest Conference games,” Bequette said. “A lot of times at Rice, we had more fans there than Rice did.

“At those other road games, you could hear our fans. But at Tech, it really was just our team against everybody.”

Adding to the nostalgic feeling of today’s game will be former Texas Tech All-American defensive lineman Gabe Rivera’s induction into Red Raiders’ Ring of Honor. He played at Texas Tech from 1979-1982.

“Tech picked this game to honor Gabe because we’re playing Arkansas,” said John Harris, in his 32nd season as a color analyst on the Red Raiders’ radio broadcasts. “This game is a big deal here.

“You certainly have a group of fans who remember playing Arkansas and being in the Southwest Conference, and in a lot of ways I think wish the conference could still be together. I just think a lot of fans are looking forward to seeing a team come here that they used to see on a regular basis and that Tech hasn’t played in such a long time.”

“The community and the student body are very close-knit,” Hatfield said. “They take a lot of pride in the football team. There aren’t a lot of other things out there, so they all really rely on each other.”