Jonesboro guard one to watch 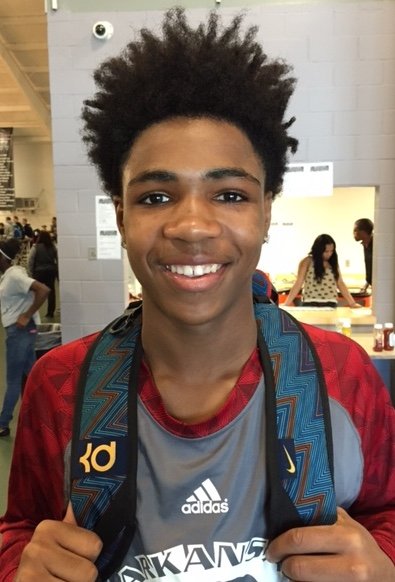 Arkansas Hawks 15-under guard Desi Sills is one of the better freshmen in the state and his play at Real Deal in the Rock basketball tournament showed why.

Sills, 6-0, 160 pounds was main factor in the Hawks winning the 15-under division over the weekend. He scored 17 points in a 62-53 victory over Dallas Showtyme Saturday morning while also playing hard-nosed defense.

“It’s about getting my teammates involved,” said Sills, who played this past season at Jonesboro Annie Camp Junior High School. “When my teammates need me, I attack the glass and shoot the three if they want me to.”

Jonesboro Coach Wes Swift is looking forward to seeing Sills in a Hurricane uniform next season.

“Desi is a very talented combo guard,” Swift said. “He shoots the three well both off the catch and off the dribble. He has go by ability both ways and can finish at the rim with both hands. His ability to see the floor and distribute appropriately has drastically improved the past six months.”

“He's a gym rat that wants to be great! We're excited about him at Jonesboro High School and expect him to come in and play big minutes right off the bat.”

Sills, who sees himself playing point guard in college, is drawing interest from Virginia, but he’s hoping to see Arkansas do the same.

“They’re really aren’t interested in me yet,” Sills said. “I hope they do. I’ve been wanting to go to Arkansas since the second grade.”

He sees room for improvement in his game.

“I have to work on my right hand more and get my teammates involved,” Sills said.

Arkansas Hawks founder and Real Deal in the Rock executive director Bill Ingram believes six of the 15-under Hawks will play on the D-I level.

Sills was impressed with Arkansas’ season.

“It was pretty nice seeing them do their thing out there,” Sills said. “I thought they were going to go all the way.”

Just like most Hog fans, Sills is curious about the plans of Bobby Portis and Michael Qualls, but gave his opinion what the Arkansas duo will do.

“They’ll come back and they’ll be even better than they were this year,” Sills said.