Bielema's concerns not same as media's 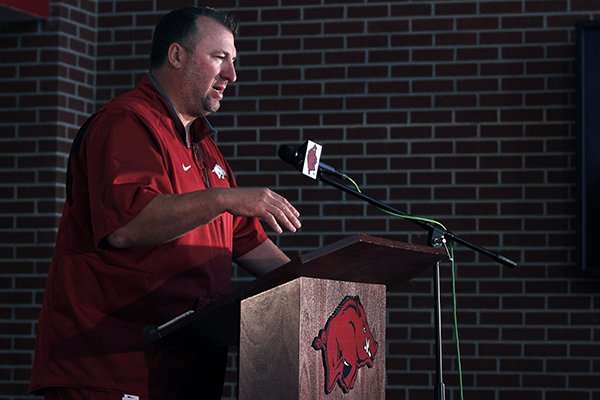 FAYETTEVILLE -- Most media outlets seem to have a specific opinion about what the Arkansas Razorbacks need to do to make up for some missing ingredients from 2014's defensive unit.

Most focus on the obvious holes left by the four players drafted into the NFL, including the All-SEC "Bermuda Triangle" of senior defensive end Trey Flowers, sophomore defensive tackle Darius Philon and senior linebacker Martrell Spaight, along with senior nickel back Tevin Mitchel.

Coach Bret Bielema has a different opinion, one he expressed in his first meeting with media since before the Razorbacks began preseason drills last Thursday.

Bielema brimmed with preseason optimism regarding the team's physical conditioning. As for the defense, he seemed much less concerned about replacing weakside linebacker Spaight with Brooks Ellis than replacing Ellis, who moved from the middle linebacker to weakside.

Bielema summed up his middle linebacker concerns in a single sentence.

"We need more consistency out of Khalia Hackett," Bielema said.

Lettering on special teams as a true freshman, Hackett, 6-2, 230 pounds, sufficiently took charge in the middle last spring after backup middle linebacker Josh Williams was moved to outside linebacker.

Josh Harris is at least an inch taller than Jamel Harris, the Alabama native that Houston Nutt's staff thought might be too small when they inherited him as a 2-year letterman from the Danny Ford staff. Turned out Jamel Harris started and played big for Nutt's 1998 and 1999 Razorbacks.

Bielema and defensive coordinator Robb Smith did have some kind words for Hackett on Sunday but don't expect them to sell Josh Harris short.

A starting part of every Arkansas safety tandem since 2012, Alan Turner always seemed to lead like a senior.

"A key for him is going to be consistency," Bielema said Saturday. "He can play as well as anybody as there is at that position. It's just that he will play eight great plays and then two of them might hurt you. We are going to really have to harp on him about being consistent."

With four big names turned pro in the wake of last season's surprisingly successful defense, much is made about Bielema calling his current "No Name" Arkansas defense "The Bad News Bears."

Perhaps not flattering, but isn't that a step up from what they were called throughout their hapless 2012 and 2013 seasons?