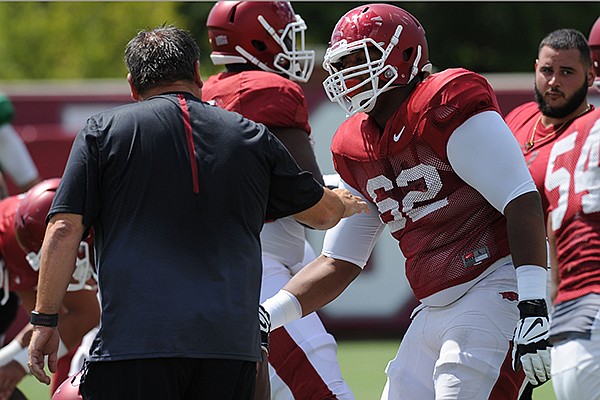 FAYETTEVILLE — The surprise of Arkansas' preseason camp was overlooked in recruiting, even by his own coaches.

Offensive lineman Johnny Gibson had a few small-school offers, but none from FBS-level programs after his high school career at Dumas. He walked on for the Razorbacks last season, redshirting and working with the team's practice squad.

Fast forward one year and Gibson is second-string on a line littered with high-profile recruits. As the Razorbacks get closer to assembling a two-deep roster, Gibson is working behind Denver Kirkland at left tackle.

So why was he so overlooked in recruiting?

"I don't know. I overlooked him, too," said Arkansas offensive line coach Sam Pittman. "I went down there and watched him. On tape, he wasn't impressive to be honest with you. But when you watched him play basketball, you saw you had a big ol' athlete."

Gibson, who is 6-foot-4 and 330 pounds, said he wasn't recruited hard because his team wasn't very good in high school and he didn't attend many camps. He averaged 15 points and 9 rebounds as a senior basketball player, but playing collegiate athletics wasn't at the top of his priorities.

He chose Arkansas because it has a top engineering school. He is majoring in electrical engineering.

And if you read the program's media guide, that's about all you'll learn about Gibson. He has the shortest bio of any player in the 2015 guide.

Maybe that's why it was such a surprise when his name kept coming up in interviews during Arkansas' first week of practice. Head coach Bret Bielema even mentioned him during the team's media day.

"I'd be lying if I said it wasn't a surprise," Pittman said. "I'll tell you what has been a surprise is how physical he's been playing. He's playing really physical."

Upping his physicality is what Pittman challenged Gibson to do prior to the preseason. He has gained about 10 pounds since arriving at Arkansas, including lots of muscle mass.

"I knew I could be more physical than I showed in the past," Gibson said. "I did all I could to prepare my body. I just wanted to get my body right so I could play to the best of my abilities."

Pittman said he wants to have eight or nine linemen to rotate by the time the Razorbacks open the season with UTEP next month. There are six, Pittman said, he feels comfortable playing right now and a few more on the cusp of getting there.

It appears Gibson could be one of those close to breaking through.

"He's playing with leverage and he'll hit you," Pittman said. "He got a little dinged up in his shoulder (this week) and he didn't miss a rep. You get a little older, a little more mature and you just keep rolling.

"I think he's just now deciding he can play at this level. He can play in the SEC and he's enjoying it. I'm telling you that he's going to be a good player for us."