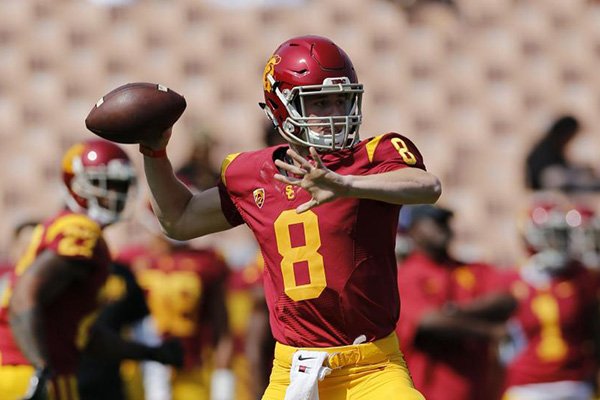 Quarterback Ricky Town, shown in this AP file photo, is transferring to Arkansas after going through spring practice at Southern California.

The Ventura, Calif., native enrolled at USC in January and participated in spring practice. He spent about a week in fall camp before asking and receiving a release.

Town will sit out this season and be eligible to play in the 2016 season.

“I am thrilled to be part of the Razorback family,” Town said. “The staff and players have made Fayetteville feel like home to me. I can’t wait to get started and help Arkansas win an SEC championship.”

He completed 192 of 290 passes for 2,639 yards and 28 touchdowns while throwing only 3 interceptions as a senior at St. Bonaventure High School. He participated in the U.S. Army All-American game in San Antonio in January.

“Ricky is a very talented young man who comes from a great family,” Arkansas coach Bret Bielema said. “We are very excited to have him join our program. Ricky is the kind of uncommon person we are looking for and will fit into our program athletically, academically and socially.”

Town has a scholarship and is expected to enroll in classes next week. The University of Arkansas' fall semester begins Monday.

Quarterback Cole Kelley, who is committed for the 2016 class, said Town's commitment has no impact on whether he will attend Arkansas.