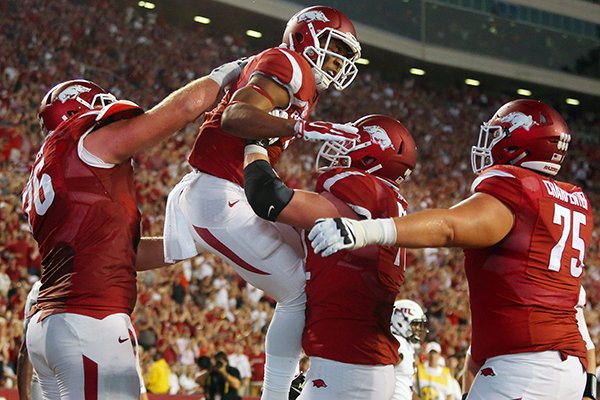 A position-by-position look at the 2015 Arkansas Razorbacks:

Brandon Allen made significant strides last year as a junior, but now it’s time for the fifth-year senior to really shine. He’s healthy, and he’s confident in the new offensive structure put in by coordinator Dan Enos. Allen suggests the Hogs will show a more balanced offensive approach by being able to attack everywhere with the passing game, which should free up wider spaces for a potent run game. Allen completed 56 percent of his passes for a career-best 2,285 yards, with 20 touchdowns and 5 interceptions last year. That marked a nice jump from his 2013 numbers: 49.6 percent, 1,552 yards, 13 TDs, 10 INTs. He averaged 175.8 passing yards per game, and if he increases that by 20 yards per game the Razorbacks will be right in the range of the ideal Bret Bielema offense. Allen’s proficiency at pre-snap reads and checking out of bad plays should be at an all-time high. As Bielema said on media day, Allen needs to play big in big games for the Razorbacks to reach their potential this fall. Redshirt sophomore Austin Allen was clearly the No. 2 quarterback through the midway point of camp, with better velocity and depth to his passes and a stronger commitment to help himself in the film room and with his diet. Redshirt freshman Rafe Peavey holds the third spot. If the Allens stay healthy, true freshman Ty Storey would ideally redshirt.

This position took a big hit when leading rusher Jonathan Williams (1,190 yards, 12 TDs in 2014) went down with a foot injury in the first scrimmage and is probably out for the season. Alex Collins got serious about his diet and playing weight and will enter the season as fit as he’s ever been at Arkansas. Collins rushed for 1,100 yards and 12 touchdowns, averaged 5.4 yards per carry and led the Razorbacks with 14 plays of 20-plus yards. Kody Walker fills the big-back role at nearly 260 pounds, but he might get more work at tailback than fullback with Williams’ injury. A redshirt season might have been best for Rawleigh Williams III, but it’s likely he’ll be needed now. Denzel Evans lost weight and had a better burst in camp. Chris Jones, Tyler Colquitt, converted fullback Anthony Brown and a collection of tight ends will share the fullback or F-back role.

Senior Keon Hatcher is the known commodity here, and he nursed a minor shoulder injury during the first scrimmage. Look for Jojo Robinson to have a breakout year while rotating with Jared Cornelius, an undervalued asset, in the slot. Transfer Dominique Reed could be the deep threat the Hogs have craved, along with the inconsistent Eric Hawkins. Getting 6-2, 207-pound Damon Mitchell in space would be a positive. Drew Morgan looked good in the opening scrimmage, but he has been up and down. Cody Hollister has good hands and blocks well but hasn’t gotten open consistently. Kendrick Edwards has come back from nearexpulsion and at 6-5 could be a top fade route and slant pass option. For Arkansas to achieve the balance it desires, three or four play-makers must emerge from this group.

Arkansas had a standout duo with preseason All-SEC selection Hunter Henry and Jeremy Sprinkle before adding the nation’s top tight end signing class, headlined by Will Gragg, C.J. O’Grady and Austin Cantrell. Position coach Barry Lunney Jr. said he likes that they all have different body types and skills, which gives the offensive staff plenty of variety. Alex Voelzke was a contributor as a walk-on freshman and is handy to have around. Redshirt freshman Jack Kraus should be capable of pitching in this year. Walk-ons Anthony Antwine and Howie Stettmeier give the Razorbacks strong depth and special-teams options.

It’s time for these guys to fulfill the hype. Denver Kirkland has made the tricky adjustment to left tackle and is a rock in pass blocking. Dan Skipper, who had rough moments holding off speed rushers while less than 100 percent a year ago, is determined to chill his hothead reputation with a move to right tackle. Center Mitch Smothers is a valuable veteran in the middle, and the unit’s soul — left guard Sebastian Tretola — is a new man 50 pounds lighter at 325 pounds. Kirkland, Skipper and Smothers all have 21 career starts. Coaches believe Frank Ragnow has the chops to thrive as the new starter at right guard. The top unit’s run blocking was outstanding early in camp, but they gave up far too much pressure in the passing game. Line coach Sam Pittman was enthusiastic about the quality of competition for backup jobs, with well-regarded Brian Wallace, Josh Allen, Jalen Merrick, Zach Rogers and Marcus Danenhauer leading the way.

This deep pool of talent earned a “story of camp” label from Coach Bret Bielema after the first scrimmage. There might not be a star of Trey Flowers’ caliber in the group of ends, but collectively JaMichael Winston, Tevin Beanum, Deatrich Wise Jr., Jeremiah Ledbetter, Karl Roesler, Anthony Brown and Brandon Lewis might give Arkansas its deepest batch of ends in decades. At nose guard, DeMarcus Hodge lost about 30 pounds and increased his stamina, and he has a bluechip understudy in Hjalte Froholdt. Taiwan Johnson’s sophomore year was a breakout season and he’s now at tackle, where his burst should play well. Bijhon Jackson should be primed for a strong sophomore season at tackle. Players like versatile Mitchell Loewen, Armon Watts and Cordale Boyd should provide quality depth, allowing up-and-coming T.J. Smith to redshirt.

The known commodities are few. Brooks Ellis, the top returning tackler, produced in the middle last year and will be asked to thrive in the weakside spot where ball carriers are funneled in the Arkansas defense. Josh Williams should be versatile as the strongside starter who is good on the blitz and in coverage. Beyond those two, the question marks arise. Can Khalia Hackett hack it as the starter in the middle? Josh Harris, an active 5-10 redshirt freshman, makes plays every time the tackling is live and he merited first-team reps at middle linebacker midway through camp. Depth will come from Dwayne Eugene, promising freshman Dre Greenlaw and mostly untested players beyond that. Even safety De’Andre Coley saw work at outside linebacker after the Hogs’ first scrimmage. Freshman Jamario Bell, who projects as a dominating pass rusher, split his time between outside linebacker and rush end during camp, as did Derrick Graham, who seemed to be settling back in at linebacker.

Lead cornerbacks Jared Collins and D.J. Dean have starting experience and they team with nickel back Henre Toliver to provide three strong cover players, the building block of any quality SEC defensive backfield. Strong safety Rohan Gaines has 25 career starts, which is tied for the most on the team with Brandon Allen and Jonathan Williams, and a consistent year from the senior would go a long way toward a good season from the unit. Sophomore Josh Liddell is already showing leadership capacity and he likes to hit. Liddell and Santos Ramirez, who had a massive hit in the team’s first scrimmage, learned lessons in pursuit angles from Alex Collins and Jojo Robinson in the first scrimmage. Ramirez, Davyon McKinney and possibly De’Andre Coley should be the top reserve safeties. Kevin Richardson, whose knowledge of the schemes draws raves from the coaches, can play anywhere in the secondary. Ryan Pulley showed he can contribute at corner as a freshman, and Willie Sykes could do the same at safety.

The Razorbacks have more quality options at kick returner than they have in years. Alex Collins finished 2014 as the lead returner, but the coaches might hold him back with his tailback reps expected to increase. Keon Hatcher, Jojo Robinson, Jared Cornelius, Eric Hawkins and Dominique Reed could all factor in. Cornelius and Robinson look like the top two candidates at punt returner. The battle at kicker might stretch into the season, with returning starter Adam McFain trying to hold off Cole Hedlund, whose accuracy has been sharp in camp, and Lane Saling. The same three will produce the kickoff man. Toby Baker blasted two long punts at the first scrimmage, and he has a quality pooch punt in his arsenal. He has the edge over freshman Blake Johnson. Drew Gorton, the leader to take over long-snapper duties from four-year starter Alan D’Appollonio, would prefer if his name was rarely mentioned this fall. The coaching staff thinks all the players with tight end- and linebacker-type bodies will fill in the coverage units nicely.