Pittman was valuable to Razorbacks 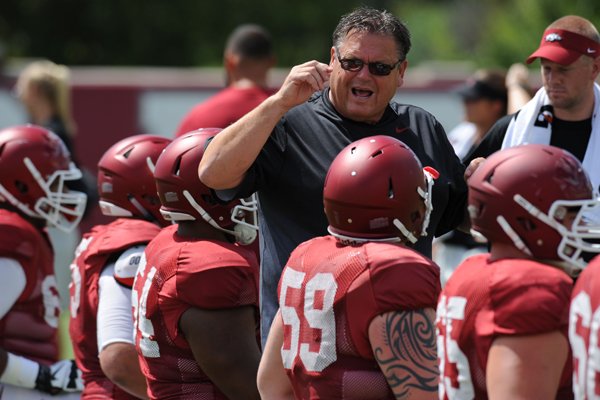 FAYETTEVILLE — It will be difficult for Arkansas to replace the value Sam Pittman brought to the program.

The Razorbacks can find another quality offensive line coach, but it will be hard to find the combination of coach and recruiter just hired by Georgia.

In a sense, Pittman was the backbone of Bret Bielema's rebuilding effort at Arkansas. The Razorbacks made the offensive line their identity, going so far as to put five linemen on the cover of the media guide this year.

Arkansas' line has been consistent, paving the way for four 1,000-yard rushers in three seasons and ranking seventh nationally this season in sacks allowed. In fact, Pittman's last four offensive lines - three at Arkansas and one at Tennessee - allowed the fewest sacks in the SEC.

Bielema has had successful line coaches throughout his career, but Pittman was among the best.

Alabama coach Nick Saban thought enough of Pittman that he offered him the Crimson Tide offensive line job in 2013. Arkansas thwarted off that advance, doubling Pittman's salary to $500,000 per year before he ever coached a game for the Razorbacks.

He received a $25,000 raise after helping the Razorbacks to a bowl game last year, but he never signed the no-compete clause that kept new Georgia coach Kirby Smart from speaking to Arkansas offensive coordinator Dan Enos last weekend.

Pittman will likely receive a comparable salary package from Georgia, but the real draw was working with his longtime friend, Jim Chaney. The two were on the Tennessee staff prior to working for Bielema at Arkansas.

Chaney parted ways with the Razorbacks earlier this year. After spending a season at Pittsburgh, Chaney was hired as Georgia's offensive coordinator Saturday.

Georgia is not just getting a great tactical coach in Pittman, but an outstanding recruiter. Pittman's offensive linemen love him because of strong relationships forged on the recruiting trail.

In fact, seven of them accompanied Bielema to Pittman's house Friday night to make a last-ditch plea for him to stay at Arkansas. It's the same house where Pittman invited his players over for pool parties during the summer.

It's in recruiting where his departure may be felt most. Pittman had made a name for himself as an ace offensive line recruiter, helping Arkansas upset college football heavyweights for blue-chip recruits.

His value as a recruiter is what sets him apart from many offensive line coaches.

Among the recruiting wins aided by Pittman:

• Denver Kirkland, an elite prospect from Miami who surprised many on his signing day by choosing the Razorbacks over the likes of Miami, Florida State and Ole Miss.

• Dan Skipper, a four-star prospect from Colorado who initially committed to Pittman at Tennessee, but flipped when Pittman was hired by the Razorbacks.

• Frank Ragnow, a four-star recruit from Minnesota who had offers from the likes of Ohio State, Wisconsin and Florida State.

• Sebastian Tretola, considered one of the top JUCO linemen in the country who was offered by Oklahoma, Florida and TCU, among others.

All have been named all-SEC in some capacity in their two or three years working with Pittman.

Behind Arkansas' starting five this season were six more linemen who were rated four-star recruits by at least one publication. The Razorbacks have another top lineman, Iowa's Jake Heinrich, committed to the 2016 class.

Asked earlier this year why he and so many other linemen commit to Pittman, Skipper gave a glowing recommendation.

"I knew that he was the best coach in the nation, in my opinion," Skipper said. "I think he really knows what he's doing and how to get the most out of his players."