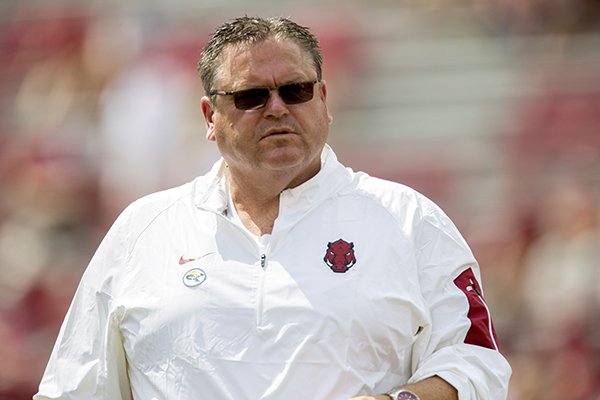 Arkansas offensive line coach Sam Pittman watches warmups prior to a game against UTEP on Saturday, Sept. 5, 2015, at Razorback Stadium in Fayetteville.

FAYETTEVILLE — Sam Pittman has accepted the position of offensive line coach at Georgia after spending three years in the same role at Arkansas.

The move reunites Pittman with longtime friend and colleague Jim Chaney, who was hired as the Bulldogs' offensive coordinator Saturday. Pittman and Chaney worked together for two seasons at Arkansas and before that at Tennessee.

Pittman was valuable to Razorbacks

A source told WholeHogSports that Arkansas coach Bret Bielema and at least seven offensive linemen went to Pittman's home in Fayetteville on Friday to attempt to persuade him to stay with the Razorbacks.

Pittman is considered one of college football's top offensive line coaches and was Arkansas' third highest-paid assistant coach at $525,000 annually. Unlike many Arkansas assistant coaches, Pittman did not have a no-compete clause that prevented him from taking other jobs within the SEC.

Alabama coach Nick Saban showed interest in hiring Pittman in 2013 shortly after he was hired at Arkansas. New Georgia coach Kirby Smart was on the Crimson Tide staff for nine years as a defensive coordinator.

Bielema said Smart called last weekend to inquire about speaking with Arkansas offensive coordinator Dan Enos, but was informed Enos has a no-compete clause that would prevent him from taking any other non-head coaching job within the SEC.

Richard Davenport contributed to this article