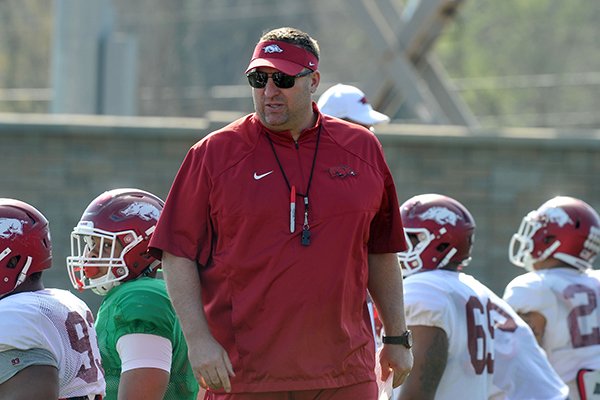 FAYETTEVILLE -- Arkansas Coach Bret Bielema amended the "no two-a-days" remark he made Tuesday at the ESPN campus in a talk to the Northwest Arkansas Democrat-Gazette and its business guests Wednesday.

"That statement yesterday comes with a little [asterisk]," Bielema said. "If they don't practice the way I want them to, we will go double days.

"But if they do what I think they're going to do, we ... may still keep it in a double-day format, but for instance in the a.m. session when we have practice, if we have younger players that take 12 plays or less -- and there'll be other guys who take 140 plays -- we may just practice those younger guys [in the evening session]."

Bielema said he also could use the second practice of the day as a walk-through with no pads or could extend the team's film session that day and have a limited walk through.

During his visit to ESPN in Bristol, Conn., on Tuesday, Bielema had said he intended to do away with two-a-day practices for this camp because he thought his veteran team knew how to maximize practice opportunities.

NCAA rules require colleges to make the first two practices non-pad days and the first five practices one-a-days. After that, teams can alternate double days and single days with a maximum of 29 practices prior to their season opener.

Bielema said over the decade that he's been a head coach he's been able to equate smaller numbers of rugged practices with better performances on Saturdays. He also related the story of cornerback Tevin Mitchel, who didn't go through two-a-days as he recovered from shoulder surgery and also missed a week of camp with a hamstring injury before having a solid senior season and being drafted by the Washington Redskins.

"I started thinking, here's a kid who had the best turnaround of my coaching career and he had no double days, he missed a week of practice and he had a senior year that was one for the memory banks," Bielema said. "What effect did double days have on him? None."

Bielema said through his conversations with strength and conditioning coach Ben Herbert he felt the Razorbacks would be a well-conditioned team to open camp.

"What I began to realize was because the NCAA allows us to do so many things over the course of the year ... our players have been able to be much more established physically ... than they have in year's past," he said.

"I realized our roster now probably plays more aggressively and physically than most teams in our league and I think it's not by accident. It's the way they're trained and the way we ask them to play. So I started saying, well if everybody else in our league thinks we're more physical, why would I make them play against each other more than anybody else?"

Bielema said Wednesday was the first day for the entire coaching staff to be back at work after summer vacations. "I don't know how my assistants feel, but it's the greatest day in the world for me," he said.