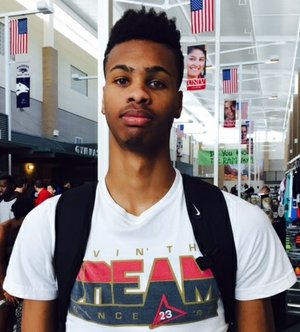 LAS VEGAS — Van Buren power forward Mitchell Smith is looking to add to his offer list after playing for the Arkansas Wings Elite in Bigfoot Hoops and The 8 tournaments in Las Vegas last week.

“I’ve talked to a couple of coaches and they say they like how I play and they’ll get back with me and keep watching me over the summer and through school ball,” Smith said.

Smith, 6-10, 200 said Arkansas, Oklahoma State, Creighton and Tulsa are his top schools. He also has offers from Tennessee and Missouri State.

“I’m talking to a bunch of coaches and I’m about to take a bunch of visits when I get back home and set those up with coaches,” he said.

Being about an hour away from Fayetteville, Smith said he’ll likely visit other schools.

“Since they’re not that far away from me I can go up there whenever to see the campus,” said Smith, who has a 3.2 grade point average and is looking to study sports management in college. “I’ll probably set some to other schools further away.”

He averaged 18 points and 11 rebounds for the Pointers this past season. He said his game has changed a lot for the better.

“I’m more confident, my role has changed from last year to this year,” Smith said. “I go out and do what they need me to do. Block shots, rebound and when I need to score, I can score. I just really do what I have to do every game.”

His doctor told him that he’ll likely add an inch or two to his frame.

A year from now, Smith hopes to have added bulk.

Bobby Portis’ success at Arkansas along with style of play helps attract Smith to Arkansas.

“You see they put two players into the NBA,” Smith said. “Bobby is doing real good in the NBA. So I want to see myself on the next level and I know coach (Mike) Anderson can get me there with hard work. I like how they run and push the ball and they’re all athletic and I think that suits my game.”

Smith and several other prospects playing in Las Vegas mentioned Portis’ development at Arkansas for their interest in the Hogs.

His decision will likely come in a couple of months.