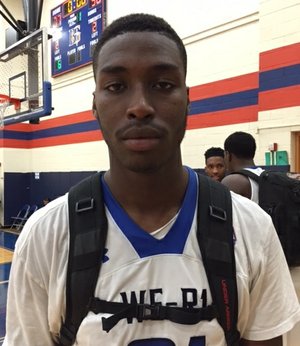 Power forward Sedee Keita is one of the more highly regarded big men in the nation.

LAS VEGAS — The success of former Hog forward Bobby Portis is paying off for Arkansas in the recruiting of highly regarded power forward Sedee Keita.

“The comparison to Bobby Portis,” said Keita, who’s talking to Arkansas Coach Mike Anderson and associate head coach Melvin Watkins. “I like his game and I would like to play like that and they said I fit his game a little bit.”

Keita, 6-10, 230 of Greenville, (S.C.) 22 feet Academy has more than 25 scholarship offers, including Arkansas. He plays for Delaware based WE R1 in the spring and summer. He’s rated the No. 19 power forward and No. 83 overall prospect in the nation by ESPN.

“They said they’re going to recruit me and come here in Vegas and follow me,” Keita said.

Keita is looking for a school that offers early playing time. He said there’s a good chance he visits the Hogs.

“I definitely like what they did with Bobby, because I know when he got there he wasn’t like he is now,” Keita said.

The athletic Keita has the ability to play several positions on the college level.

“On the professional level, I’ll definitely be a three, I know that but college a stretch four,” Keita said. “Something like Bobby, step out and shoot and put it on the floor. I try and do everything basically.”