Benintendi a finalist for Golden Spikes 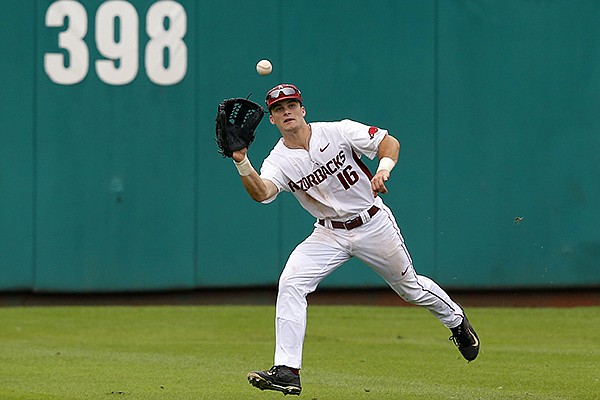 Arkansas outfielder Andrew Benintendi reaches up to grab a fly out by Oral Roberts's Anthony Sequeira in the third inning of a game at the Stillwater Regional of the NCAA college baseball tournament in Stillwater, Okla., Friday, May 29, 2015. (AP Photo/Sue Ogrocki)

FAYETTEVILLE — The Golden Spikes Award will go to a player from the Southeastern Conference.

Arkansas' Andrew Benintendi, LSU's Alex Bregman and Vanderbilt's Carson Fulmer and Dansby Swanson are the four finalists for the award, which goes to college baseball's best player. The winner will be announced June 23.

The finalists were voted on by a USA Baseball committee of more than 200 voters.

All four finalists are expected to be selected in the first round of the MLB Draft later this week.